For over a decade, the team of John Ostrander and Jan Duursema consistently has delivered some of the highest quality stories in the Star Wars Expanded Universe. During the Prequels years, their entries in the Republic comics series featured their signature characters, Quinlan Vos and Aayla Secura, in storylines about the tolls of war on the Jedi, the danger of the dark side of the Force, and the importance of friendships and relationships. In 2006 they launched the Legacy series and introduced an impressive cast of equally memorable characters including Cade Skywalker, Darth Krayt and his One Sith, and the Fel Empire’s Imperial Knights. Jumping ahead to over 130 years after Return of the Jedi, and about a century from the then-current EU, Legacy extrapolated the future of politics, war, Force philosophy, and family histories in the galaxy. With the new Dawn of the Jedi series, Ostrander and Duursema shift to the opposite end of the timeline – 36,453 years before A New Hope, to be precise – to tell a tale grounded in the very heart of the Star Wars universe: the origins of the Jedi Order itself. The series begins with the first five-issue arc, Force Storm. 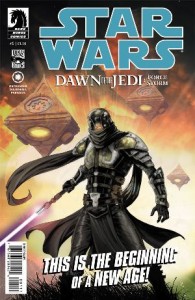 Simply on its own merits, Force Storm is a great Star Wars story. It has adventure and drama, action and banter, stunning visuals and cool technology, moments of lighthearted humor and scenes of powerful emotional intensity. Someone with only passing familiarity with the movies, much less the EU, could pick up the comics and feel like they’re experiencing what they expect from Star Wars.

What makes Force Storm outstanding is the thoughtfulness and insight with which Ostrander and Duursema have reverse-engineered the setting, characters, and Force philosophies to create a fully believable “real” ancient history of the Jedi. Once again their work displays their mastery of the deep themes and foundational conceits of Star Wars.

The careful design begins with the setting. Across more than three dozen millennia, a constant challenge to the Jedi is understanding the balance between the light and dark sides of the Force. On Tython, the home planet of the Jedi Order, the concept of balance is manifested by the world itself. Great storms erupt when the Force is disrupted by momentous events, and even on more mundane days the proto-Jedi – calling themselves Je’daii, meaning “mystic center” – observe that their actions affect the Force and the Force affects the world around them. The Jedi concept of balance is not merely philosophical, but has its origins in the practical.

Another longstanding theme in Star Wars is the struggle of the Jedi to determine how they should conduct themselves in a galaxy marked by violence, conflict, and often war. The planet Tython is so dangerous that it is unsafe for non-Force-sensitive individuals to even live there, creating a literal separation of the Je’daii from the other inhabitants of the Tython system. Over time, this led to estrangement and mistrust as the Je’daii selectively chose when and where they would intervene in others’ affairs. The most recent major war in the Tython system, the Despot War, ends with a battle on Tython in which the Je’daii and their allies prevailed, but only at great cost. All of these elements echo through the ages of Star Wars history.

“Their lives became a moving meditation on the Force.”
~Master Ketu

Yet not everyone in Star Wars seeks balance like the Jedi. Like the Sith in the Prequel Trilogy and the Empire in the Original Trilogy, the villains of Force Storm have no interest in anything but power, control, and conquest. The Rakata and their Infinite Empire were introduced as backstory elements in the Knights of the Old Republic videogame, and subsequently received additional hints and clues in sourcebooks and other materials, including the recent The Old Republic game. In Dawn of the Jedi they are suitably menacing and disturbing in their unimpeachably evil approach to the galaxy, particularly the utterly ruthless way the ruling predors treat the “Force hound” slaves who guide them to planets with Force-sensitive inhabitants to be culled for Rakatan servitude. 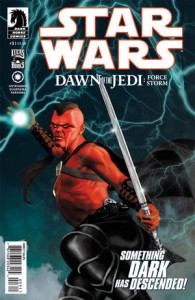 In more subtle ways the setting also makes extensive connections to much of the pre-existing Star Wars saga and continuity for those who understand the references. Many fans will catch the names from George Lucas’ early drafts of the original Star Wars, including the moons Ashla and Bogan symbolizing the light and dark sides of the Force and the Dai Bendu monks as one of the groups who traveled to Tython. In their combat gear and weapons, many of the Je’daii resemble samurai, another well-known inspiration to Lucas. Fans familiar with the EU will appreciate the many nods to other material besides the Rakata, including the planet Byss as a headquarters world, Dathomiri women riding rancors, and a flashback to Tatooine’s lush past before it was ravaged into a desert world. Force Storm also includes precursors to familiar technology, such as starships before the invention of hyperdrives, a holomessage-carrying flying droid that functions as a robotic carrier pigeon, and an early version of an energy blade.

Force Storm is populated with characters who are recognizably from Star Wars while also serving as ancient iterations of the more familiar later archetypes. Master Quan-Jang is a skilled tutor, but his wisdom about the Force isn’t as profound as he thinks. Hawk Ryo and Rori Fenn are dutiful senior Je’daii who also cannot help but recall feelings for each other in the recent past. His pupil, Shae Koda, struggles to control her impatience and anger. Tasha Ryo, a Twi’lek crime lord’s daughter derisively called “princess” by Shae, illustrates the challenge of dutifully serving the Force while also feeling deep attachments to familial duty as well. Sek’nos Rath is brash, overconfident, and eschews shirts while he flirts with the ladies – and surely it is no accident that the Je’daii who most frequently deliberately reaches for dark-side powers is from the red-skinned Sith species. On the villainous side, Daegan Lok was a former top student who was exiled to Bogan after choosing the dark side. The Rakatan predors practically revel in the deaths they order, and literally feast upon the defeated. Unsurprisingly, then, the Force hound Xesh knows no principle except that arena rules always apply, and the only way to survive is to kill the enemy first. Finally, Ostrander and Duursema deserve praise for again crafting one of the most diverse casts of characters in Star Wars. Men and woman are equally represented among the key characters and in positions of power, aliens are omnipresent, and the humans and near-humans showcase a great range of appearances resembling real-world ethnicities.

Perhaps most fascinating and impressive, though, is how Ostrander and Duursema have reverse-engineered the ancient Je’daii Force philosophy from the later teaching of the Jedi, Sith, and other sects in a way that parallels the real-world development of theology and philosophy across the millennia. In the real world, for example, although three of the four dominant faiths on contemporary Earth are monotheistic, most ancient religions were polytheistic, representing different aspects of the natural and spiritual worlds with different divine figures. In a similar way, although the future Jedi Order will have only one main Temple for all aspects of Jedi teachings, the Je’daii of Tython have multiple Temples, each with its own specialty, including knowledge, alchemy, balance, and healing.

Similarly, the teachings of the Je’daii are recognizable as earlier versions of later doctrines. In real-world moral and political philosophy, some cardinal insights of thinkers like Aristotle or Plato continue to resonate today, as do ideas from Hobbes, Locke, Montesquieu, Mill, and Kant, among many others – and the influence of all of them can be seen in the writings of contemporary figures like Rawls, Dworkin, and Nozick. Modern economists like Milton Friedman and Paul Krugman still owe much to Adam Smith, just as Einstein built more complex layers atop Newton’s physics. In much the same way, the Je’daii teachings about maintaining the balance between the light and dark sides of the Force, and about the nature of the dangers posed by the dark side, come across as simplistic and unsophisticated – and sometimes misguided – compared to later ideas about the Force.

At the same time, though, the Je’daii are quite clearly the predecessors of the Jedi. Master Quan-Jang, for example, conducts genetic experiments on creatures and reaches to the Force for power and aggression – acts that would be forbidden as dark side for Jedi. Yet he also engages in quiet mediation, draws strength from the serene support of his fellow Masters, and selflessly risks his own life by seeking to dissipate a Force storm rather than overpower it. Although Xesh expects her to kill him when he is beaten, Shae Koda takes him prisoner. Even though he is steeped in darkness and his arrival triggered the ominous storm, the Je’daii Masters do not execute Xesh, but rather exile him to Bogan for meditation to try to attain balance with Ashla and the light side of the Force. The Je’daii still have much to learn about the ways of the Force, but now they have begun to embark along the path.