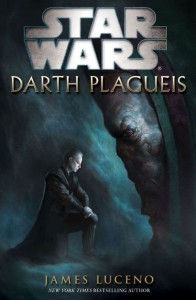 In the ominous opera house scene in Episode III: Revenge of the Sith, Darth Sidious lures Anakin Skywalker to the dark side with the legend of Plagueis the Wise, a Sith Lord who had discovered the power to stop death but who couldn’t save himself from murder at his apprentice’s hand. Ever since, Star Wars fans have wondered how much of Palpatine’s tale was true and how much was Sith fabrication – and whether that murdering apprentice might even have been Sidious himself.

In Darth Plagueis, those questions are finally answered. So are some of the other longstanding questions about Palpatine’s past, before and after he became a Sith apprentice. But part of Palpatine’s effectiveness as a villain always has been the mystery surrounding him, and the novel craftily leaves the shroud of secrecy in place over some aspects of his character where revelation would do more harm than good to the saga. For fans interested in learning more about the Sith and their intricate Grand Plan to bring down the Republic and the Jedi, Darth Plagueis adds some intriguing and disturbing depth to the backstory of the Prequel Trilogy.

The front cover art sets the tone for the book: a younger Palpatine kneeling in subservience to the looming visage of an alien. Unlike the movies, or the Expanded Universe books and comics before now, this is not a tale of Darth Sidious as puppetmaster pulling the strings of galactic events or terrifying autocrat. Instead, we see the first real glimpses of Palpatine as a pupil or cautious low-level politician – someone who is even, on occasion, vulnerable. At the same time the seeds of the machinations and domination to come are thoroughly sown, and the diabolical personage we associate with Palpatine is very much in evidence.

Luceno writes Darth Plagueis in the same clear, direct style of his previous Star Wars novels. Scene-setting unfurls in the grandiloquent prose of classic pulp space opera, and characters sling banter – and insults, veiled and overt – that sound like they’re right out of the movies. Brief passages of intense introspection or chilling Sith Force philosophy serve the story in the right moments, but most of the book relies on dialogue and internal monologue to advance the plot. In Luceno’s novels the craft of his writing is for the most part invisible, carrying the reader along for the ride without jarring you out of the story. The first quarter of the book, though, gets bogged down in the Lucenopedia – an overwhelming cache of facts and minutiae that gives the story depth but a little too much density.

From the cover, dust jacket blurb, and marketing material, fans might have taken the impression that Darth Plagueis would be essentially a Sith apprenticeship book, filled with unsettling training methods and dark deeds. There is certainly a good deal of that in the book, but ultimately the core plot of the book is the unfolding of the Grand Plan to bring down the Republic and destroy the Jedi Order. And, as the movies show, that scheme wasn’t about Force powers or lightsaber duels, but political outmaneuvering of Machiavellian proportions.

In fact, Darth Plagueis is really best described as a companion novel to Cloak of Deception, Luceno’s 2001 book elaborating on the political backstory to The Phantom Menace. It’s not a sequel to that book; Darth Plagueis begins decades farther back in time and ends during the events of Episode I itself. Perhaps more like a fraternal twin – the evil twin. In Darth Plagueis we learn more not only about the Grand Plan of the Sith, but also the corporate entities that will comprise the Separatist alliance, the alienation of Dooku and Sifo-Dyas from the Jedi Council, the origin of the clone army, the power struggles between rival Hutts for control of Tatooine and between nearby planets for dominance over their regions of space, and the political developments that led to a new monarch and Senator from Naboo and new Supreme Chancellors of the Republic. As in Cloak of Deception, Luceno weaves numerous threads together into an intricately plotted tapestry. Few other authors can manage to make the politics of Star Wars nearly this interesting.

The novel may be titled Darth Plagueis, but Palpatine plays an equally prominent role in the book. With the exception of a handful of passages for dramatic effect, the entire book is told from the third-person-limited point of view of either Plagueis or Sidious. This marks a contrast to most of Luceno’s prior Star Wars novels, which tend to feature much larger casts and more characters in prominent roles. The technique is very effective for this book, though, and its story probably is best served by keeping the focus on the two Sith Lords at its core.

Other than Plagueis’ rise and fall as Sith Master, the book shines when telling Palpatine’s story. While readers get to look behind the veil, there’s no attempt to make him sympathetic. He is a monster, and that is what makes the Sith in this book so utterly delicious.

Luceno is renowned for his mastery of the lore from the movies and the Expanded Universe, and Darth Plagueis is no exception. For those in the know, there are numerous references to events from novels such as Cloak of Deception and Darth Maul: Shadow Hunter and comics including Jedi Council: Acts of War and Darth Maul. Backstories of characters from the Prequel era are filled in, and characters who will play prominent roles in decades to come are seen in their earlier years. Luceno even includes a scene specifically to account for the Nightsisters trilogy of episodes from Season Three of The Clone Wars. The nature of the Force is thoroughly examined from the Sith point of view. This book doesn’t change what Lucas has given before – most notably from the TCW Mortis arc he used to flesh out his Force philosophy – but rather enhances it.

At the same time, these winks and nudges of lore generally will not be distracting to a reader who’s unfamiliar with the earlier sources, and in that way Luceno displays his skill at mirroring the in media res dynamic of the Star Wars films. With Darth Plagueis timed to hit the shelves shortly before the 3-D theatrical release of Episode I, this aspect of the novel makes it a great entry point to try to attract new readers to the Expanded Universe. Still, the book could have strengthened its impact in that regard with a brief appendix of references – “to learn more about X, read Y” – rather than leaving it to the readers to figure it out for themselves on Wookieepedia or Google.

Only a handful of female characters appear in the book, several of whom are quickly slain by the Sith after being introduced. Notably, though, they were shown as competent in their own right, just overmatched when confronted by a Sith Lord. Similarly, there are more references to Padmé Naberrie and Queen Amidala by others than appearances by her in person. Padmé, though hardly seen, doesn’t always play the part Palpatine expects of her in the Grand Plan. Considering how many of the other characters bend to the Sith will, that says something about her character.

Given its title, plot, and thematic focus, Darth Plagueis is not a novel likely to lead hordes of female fans to rush to buy it off the shelves or online. A tale of two Sith does not, naturally, contain many of the elements female fans look for, and a book centered around the Sith and their Grand Plan, while it has its scenes of intrigue and combat, is hardly a rollicking space opera jaunt in the spirit of the movies. In the end, though, that is not really a criticism of Darth Plagueis itself as a novel. Luceno tells a great story within the bounds of what the book calls for, and the revelation of long-kept secrets may entice many infrequent EU readers to pick up this one. The dearth of fangirl-friendly novels among the recent EU releases is a broader problem of story selection, and Darth Plagueis, executed from Lucas’ vision, is a book that should have been written. Seven or eight years ago this book would have benefited from the momentum of the EU. This is one of those books female fans will enjoy for the lore it adds to the movie legacy that has captured our imaginations.

In the last decade, Luceno has been entrusted with two novels, Labyrinth of Evil and Dark Lord: The Rise of Darth Vader, to literally bookend the beginning and end of Revenge of the Sith, two novels and a novella elaborating the backstory for The Phantom Menace, three novels in the New Jedi Order series including the capstone finale The Unifying Force, and a history of the iconic ship titled simply Millennium Falcon. It is little surprise, then, that Luceno was also trusted to do justice to the legend of Plagueis the Wise and the apprenticeship and rise to mastery of Sidious, the fearsome Emperor. Just as it is no surprise that Luceno, once again, succeeds.