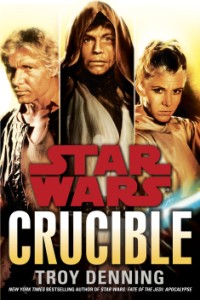 This book makes me feel like I played a game of chicken with Troy Denning.

It’s as if he included some of the trippiest and most graphically violent activities I’ve ever read in Star Wars to I see if I could physically keep hold of the book and make it through until the end.

Though it was mainly a painful read, the book had some good qualities. I love that Han and Leia are still going strong after all these years. I like the little moments that illustrate how in sync they are, how easily they read each other, and how clear their love is. Vestara Khai is in the book, too. She surprised me with how dedicated she was to her Sith ways. I haven’t been her biggest fan, but I was oddly proud of her here. Until she got wishy-washy and lost all her confidence, she was hands-down the strongest villain in the book.

The story poses two challenges for the Jedi Order, which I found fascinating. One of these was the idea of potentially training future enemies. Luke’s Jedi Order has already done this a few times, but here they’re finally addressing it, trying to figure out what they can do differently to prevent it from happening again. What do you do with a candidate who thinks he or she is ready to be a Jedi but is missing elements that will make him or her a good Jedi? In Crucible a group of Jedi Masters are wondering if expulsion of a candidate is an option. I’ve been waiting for someone to address this since the Myrkr mission practically fell apart all the way back in The New Jedi Order. (Over 30 books ago, for those counting.) After all, rejecting a candidate who feels so close to being ready seems like it would all but guarantee that Force-sensitive individual won’t be on the same side as the Jedi down the line. The idea of instead showing the candidate their weakness and giving them a chance to work on it seems like a real positive step forward for the Order.

The other Jedi challenge comes from their outsider status. They no longer have any official affiliation, but they’re still expected to quell many regional conflicts while being spread so thin. This story could have been about one of the regional conflicts mentioned, but alas it is not. This story isn’t even about the Jedi Order; they’re relegated to a chapter in which those aforementioned intriguing issues are run away from as quickly as they were touched upon.

For a while now I’ve yearned for more stories in this part of the Expanded Universe timeline where the entire galaxy isn’t at stake. Crucible won’t let us have that, though. What initially appears as though it could be a story of regional pirating and corporate pushiness, very quickly spins out into yet another threat for everyone and everything that calls the galaxy far, far away home.

This is supposed to be the story of how Han, Leia, and Luke decide to finally retire. But Han and Leia visiting Lando to help him sort out issues affecting his mining operation kind of sounds like a Han and Leia retirement activity already. And Luke – still convalescing from his injuries at Abeloth’s hand at the end of the last series– just wanted to get out of the house. They weren’t looking for one last great adventure, but then the story got incredibly surreal and violent on them nonetheless. This isn’t the Big Three stepping aside because they see the next generation rising up to take on the galaxy’s problems. If anything, they see the next generation as a convenient ride, an extra lightsaber in battle, or someone to talk to when they’re being forced to play strip torture sabacc.

So the characters you came to this story for don’t actually evolve at all. But they are maimed repeatedly, plus killed and brought back to life a few times for good measure. Despite all the physical brutality that got too graphic for a Star Wars story, the villains were mostly cartoonish. In many places the dialogue reminded me of small children doing a school play. And while I understand this was meant as a possible entry to the EU for new readers, the writing was incredibly heavy-handed and doesn’t give any credit to the reader’s ability to think.

Never before have I been so glad to see my favorite Expanded Universe character, Jaina Solo, practically left out of a story.

In case you’re wondering, I did manage to hold onto the book the whole time. But I did glare at it a lot. There was also a point where I said out loud something to the effect of, “If you’re going to kill them, just do it and get it over with already.” This from someone who would prefer Han and Leia to die of old age some time in the distant future.

I wrote an overall very favorable review of Denning’s previous Star Wars novel, Apocalypse, but Crucible lost me. Waru has nothing on this.