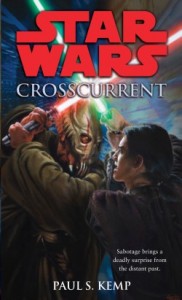 Crosscurrent is the first entry into the Star Wars Expanded Universe for author Paul Kemp.  It is a thoughtful book written by a skilled wordsmith, but I wouldn’t say the book is for every fan.

The artwork done by Dave Seeley, who happens to be one of my favorite Star Wars cover artists, didn’t really speak to me this time. In other words, I wouldn’t feel inclined to pick the novel off a bookstore shelf or click on the thumbnail online.  Perhaps that’s a function of my recent mindset of, “Sigh, yet another book about Sith or an unrecognizable male Jedi – I think I’ll pass.” That’s not Kemp’s fault, though.  In fact, he noted in an interview with TFN that he was given quite a bit of free rein creatively; he wrote what he wanted to. It’s the franchise that has to monitor the array of books they’re offering, and the cover art for that matter.

When I shop for books, I’ll also check for the Dramatis Personae, and see if anything might catch my eye. Something did – not one female character.

Kemp has a strong handle on word choice, cadence, and readability. For the most part, the book is clean – although one three-page section had obviously been rewritten and quite a few accept-change errors ended up in the text.  Otherwise, Crosscurrent flowed easily for me as a reader.

Kemp actually thinks about his characters, and their journeys drive the plot. Jaden Korr, though, is a protagonist not a hero, and Relin, the Jedi from the past, is far from a hero. The novel is wrapped around their struggles with self-doubt and the dark side, but unlike Luke Skywalker or Anakin Skywalker their arcs are neither hopeful nor tragic.  All we’re left with as readers is two Jedi wallowing in their post-traumatic stress while moving from A to B. I can’t say I felt better for where they’d gone.

On the other hand, the side characters were interesting and likeable. Khedryn and Marr, the junkers with the hearts of gold, are built on solid Star Wars archetypes.  Each undergoes a transformation of spirit that held promise, but this book wasn’t their story.  Still, they were what kept me reading to the end. Marr’s awakening to the Force through the use of mathematics and an analytical approach showed Kemp’s creativity and his ability to bring fresh insight into how each individual Force-user would approach their powers differently.  I found Kell – not to be confused with a fan-favorite Wraith pilot from the EU – to be one of the most compelling characters in the novel. Kemp created a uniquely alien perspective for the vampire-like creature that highlighted some inspired internal monologues. But I had a hard time understanding how his arc truly fit within the arcs of the overall story.  For that reason, his part ended up feeling disjointed and more like a technique to ensure we got to see the One Sith.

Unfortunately, this character-driven story was mucked up by the use of time travel as a plot device. I understand why the Star Wars franchise has opened the historical Old Repubic era set thousands of years before the movies so they can create games and stories that still feel Star Warsy. When the two timelines intersect, however, the problem with that span of time becomes more evident. Kemp makes a good attempt to show a difference in language and technology, but they are simply too alike to make them credible to me. Again, it’s not Kemp’s fault that the two eras aren’t more dissimilar, but I think the authors should be very wary of directly juxtaposing their incongruous and implausible similarities within the same story.

You’ll find Sith and Jedi in Crosscurrent, but they’re not Original Trilogy Jedi or Prequel Trilogy Sith or vice versa. The characters from the Star Wars factions for good and evil are crafted as protagonists and anti-heroes, rather than heroes and villains. Then there’s the gore – vomit, snot, blood, decapitation, and body parts.  The descent into the Imperial test lab is truly chilling, but for my taste there was too much shock and not enough of the awe we’re used to from Star Wars.

As I read this book, I kept thinking there was a good story in there – but it wasn’t a Star Wars space opera, rather a scifi time travel story.  The EU books have lost their vision of Star Wars through poor brand management, not the authors’ intentions.

A Fangirl’s Perspective & the Transparisteel Ceiling

I read books as a fangirl, looking for what I’d like to see out of stories as a woman and a fan. Unfortunately, the Dramatis Personae truly does reflect the excessively testosterone-washed Star Wars tale that Kemp tells.  Even in scenes that include ancillary characters, they’re almost all men; the female characters are mentioned as dancing girls or a victim of a blaster shot.  To me, this is not reflective of what George Lucas’ directly supervised work has been trying to accomplish in the last few years, to expand the Star Wars universe to be more inclusive. Kemp is a skilled writer, so it’s a shame he chose to write off appealing to a large segment of the EU fanbase.