You may remember I found A New Dawn a promising start to the new era in Star Wars books. I was less impressed with Tarkin. And now we have Heir to the Jedi which, when combined with what’s on the horizon in announced books, makes me wonder if my hope was misplaced. 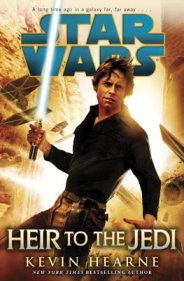 This first person narrative of Luke Skywalker between A New Hope and The Empire Strikes Back reads for the most part like a young reader’s book. Since Luke is recounting this story from his past and we know he is in The Empire Strikes Back, there’s an extra onus to create tension and make it seem like Luke may actually be in danger from time to time. Instead the story is delivered matter-of-factly and every choice and incident is telegraphed like Shatner in a Star Trek fight scene.

To top it off, I’m pretty sure Luke survives this book not thanks to the Force–although it definitely helps a few times–but due to sheer luck. Every foolish choice he acts on works out just fine and sometimes there’s even another character there to explain away how what he did was OK. And if it weren’t discouraging enough to watch your hero fumble, he acknowledges the dumb moves every time as knowing they were dumb before he made the decision. It’s not a stretch to think there’s still some farmboy naivety in him, but this goes overboard. This Luke Skywalker is not someone I would want to imagine being like or being around and he doesn’t even inspire confidence in knowing he’s out there fighting the good fight. I’m not really sure why he was sent solo on the book’s initial mission in the first place. He does not seem at all qualified to be evaluating weapons suppliers for the Alliance. What he has going for him is he’s a good pilot. So there’s that.

The cool thing about this part of the timeline is we have a Luke who has recently found out about his connection to the Force, but has had the bare minimum of training with it. He doesn’t know anyone who can guide him going forward either. This idea of being frustrated and lost and muddling through trying to understand and put to use his ability is interesting. And there are a few thoughtful explorations of this in Heir to the Jedi.

We also have the improvement over Tarkin in there being multiple and even leading female characters. Better yet, their inclusion comes off naturally. Some of them even have lives outside of their purpose in the story. Nakari Kelen, a new character, starts off well but eventually becomes merely the person Luke talks to. It’s more than that though:

Luke addresses his feelings about all the people he’s lost.

Luke addresses his feelings about all the people he’s lost but only because the main female character (Nakari) is killed after her interesting set-up is validated by her strange but rich and powerful father and then pushed aside so she can spend all her time being Luke’s not-so-interesting manic pixie dream girl. (See Women in Refrigerators trope, Manic Pixie Dream Girl trope, Mad Scientist’s Beautiful Daughter trope, Disposable/Temporary Love Interest trope).

Really that last bit was the biggest misfortune because Luke’s reflection is beautifully written. In fact, it’s some of the best writing in the book. But the heavy trope-laden dissolving of the female lead that got him there is cringe-inducing and unnecessary. Actually that’s the tragedy of Heir to the Jedi, most of its problematic parts are clearly fixable. Present tense storytelling could have heightened the tension and lessened the issue of predictability. Luke could have had someone from the Alliance with him in his initial mission to shorten the amount of time he seemed totally out of his depth while still having his own time to ponder the Force. There could have been a situation where Luke only thought he lost Nakari or even a conversation between the two of them that would have opened the door to his grief. And then she could have had agency and decided she’d had enough danger and be on her way.

While reading Heir to the Jedi there were times that I thought the most appropriate audience for this book would be kids aged 11-13, but by the conclusion, I’m not even sure it’s for them.