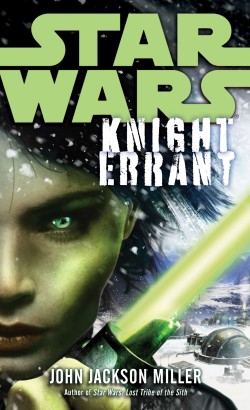 This book has been out over a month at the time I post this review, and I’ve just now reached the point of completing it. That probably sums up my lack of enthusiasm for the novel.

Before I picked up the book, I’d read the first four issues of the companion comics series, so I knew the protagonist is female. But upon seeing the novel’s cover art, I was nonplussed by how androgynous the image was. Is that supposed to be a girl? The artwork is fine, but I don’t see it captivating a woman’s eye as she’s perusing the bookstore or online booksellers.

Sadly, I have to say it: the Knight Errant novel is the perfect example of why Del Rey and Lucas Books should stick with their policy of only hiring previously published novel authors to write books for Star Wars.

From start to finish, Miller’s writing suffers from numerous defects common to amateur prose writers. While Miller avoids the misstep of head-jumping POVs within a single scene, he solves that problem by using far more POV characters than would have been needed to make the narration work, and by frequently intercutting from one scene to the next. Too many of those scene shifts present information that wasn’t necessary to move the story forward. Likewise, some of the plot points – for example, how the Bothan spy Narsk escapes from custody – are repeated from several different POVs, but not to present new information that the reader needed to know. At other times, Miller seems more comfortable relaying Kerra’s actions from the POV of another character who’s observing her. When used as often as Miller does, though, that POV choice actually diminishes the reader’s understanding of Kerra’s mindset and motivations, and this probably explain a lot about why some fans have expressed an inability to connect with her character.

As Miller does more prose writing, I hope he gains more confidence in his readers to pick up story elements the first time and takes more time to consider the characterization implications of his POV choices. Given that he was a novice novelist, Del Rey needed to provide that much stronger editorial guidance than usual to hack away at narrative weaknesses such as excessive exposition.  In fact, there was almost a compulsive need to lay every last detail on the table about the characters and the situations.  The story told in Knight Errant would have been more effective, and more captivating to read, if it had been a lot leaner.

At the risk of belaboring the point, there are several other areas of Miller’s writing that really jumped out at me as in need of improvement:

The novel started too slowly for my taste. Miller spends too much time describing this thing and detailing that thing, but not advancing the plot. Similarly, he introduced a very large number of characters in a short span of time, and it simply became too much to absorb. In the end, the reader knows a little about a lot of people. The plot finally gets moving about a third of the way into the book, but that’s when the first part closes and the second part opens with new world-building and more new characters. At that point it was hard to invest in any one character.

In some reviews of Knight Errant around the internet, you’ll see effusive praise for Miller’s world-building. I agree that Miller is very skilled in that department, and if you’re the kind of reader who enjoys reading novels for their world-building environment more than their characters and stories, then you probably will like this book. But for readers, like me, who care primarily about the tale being told, there’s just not enough story in Knight Errant to carry a 400-page novel.

The titular character in Knight Errant is Kerra Holt, a “lone female Jedi” behind enemy lines deep within Sith space in a Dark Ages style period of the Old Republic. I’ll be honest: I didn’t click with Kerra as a female protagonist at all. Some of this is because of the character’s actions: she’s a Jedi, but to my mind she’s not very heroic. She’s fighting the evil Sith, but I’d call her actions “making a difference” more so than “doing good.” Too often, Kerra is straddling the line between doing what’s right and achieving her goals, and the trouble I see for her is that, even this early in her adventures, she already seems to be losing sight of that line. Mostly, though, I think I reacted the way I did to Kerra because although she’s the nominal title character, this book isn’t really about her. Instead, Kerra is just the mechanism used to travel through the three story arcs building the three Sith regions. The reader is given no compelling reason to care about Kerra or what happens to her.

Miller chose to open the book with a scene about a Sullustan who spends his life adding Daiman’s mark to the Aurebesh alphabet. The Sullustan has only a tenuous connection to Kerra: she tutors his granddaughter, and by way of a turn of events the granddaughter ends up in peril with Kerra to her rescue. Yet any actual depth of connection between Kerra and the child – the relationship-building – is forsaken in this book for world-building and an overload of one-dimensional characters. And this is the crux of the problem with the novel. Without the relationship-building, Kerra or her journey as an errant knight through Sith space isn’t going to resonate with many readers, particularly not female readers.

Other characters, like the mercenary Rusher and the spy Narsk, wavered so much in their portrayals that I never got a sense of who the author meant for them to be. Beadle’s presence and storyline, which I suppose was meant to be comic relief, just confused me more, about Rusher in particular. The only characters I felt the author had a true sense of were the Sith. It is my personal opinion that these characters didn’t even need to be Sith, just insanely egomaniacal bad guys, and that might have been a whole lot more fun.

I’ll repeat here what I started with: I could barely get through this book. The characters didn’t grab me, the plot moved too slowly, and the world-building was more focused on showing the diabolical and maniacal nature of the Sith than in creating a Star Wars environment in which the reader would really be invested in the heroes’ success. While Knight Errant is obviously appealing to some fans, this book did nothing for me. Novels like this are not why I pick up and read Star Wars.

Along those same lines, I think the editors and supervisors at Lucas Books would be well advised to be careful about maintaining control of the direction being taken here. Sure Knight Errant is way back on the timeline, in uncharted territory, but personally, I’m not at all sure Miller has developed the Sith in Knight Errant to line up with the vision George Lucas has of the Sith. Dave Filoni explained in an episode commentary for The Clone Wars how two ancient Sith Lords had been planned for inclusion in a recent storyline, but George ultimate removed them because it would send the wrong symbolic message about the nature of the Force and the nature of the Sith in the Star Wars galaxy. Exposing the villains, particularly the Sith, and their inner workings can backfire. Contrast Knight Errant with the One Sith in the highly acclaimed Star Wars: Legacy comics; we don’t need to know what makes them tick, other than they’re evil and bent on total galactic domination.

More broadly, I think Lucas Books also needs to be more cognizant of avoiding the danger of authors becoming too proprietary about their own personal contributions to the Expanded Universe. The most notorious example is probably the way in which Karen Traviss’ culture-building for the Mandalorians began as a small side element in a novel primarily about Republic Commandos, and ended up dominating not only the content and tone of that series but also Traviss’ three novels in the Legacy of the Force series. But there are other examples, too, including Troy Denning’s influence over all three post-NJO book series and the high degree of autonomy apparently given to Dan Wallace and Jason Fry to insert continuity-minutiae fan-service into general-audience sourcebooks. Although Knight Errant does not appear to be at this point yet, it could become problematic to allow Miller to have so much ownership over this particular point in the timeline.

Knight Errant is a niche book for a certain type of fan who enjoys world-building and factual details about the Star Wars galaxy. In fact, much of what’s presented in the novel could just as easily, and perhaps more effectively, been presented in a roleplaying game manual or a nonfiction sourcebook. For female readers who want to read about characters, and their interactions and relationships, this book has basically none of that to offer them. For that reason, I wouldn’t recommend it most of my friends who read novels for entertainment, even the ones who read Star Wars.