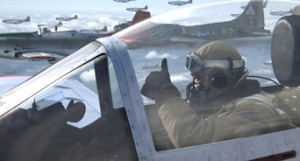 Red Tails is a classic George Lucas movie: visually stunning, characters crafted more as archetypes than personalities, laced with humor and social commentary alike, and aimed at a primary goal of unapologetic entertaining fun. Many aspects of the original Star Wars trilogy were crafted as homages to the Buck Rogers popcorn movie serials of Lucas’ youth, right down to the cheesy dialogue and stilted acting, and fans who came to the prequel trilogy expecting “serious” movies like Peter Jackson’s Lord of the Rings trilogy, which came out around the same time, were bound for inevitable disappointment. Likewise, viewers and critics who expect war movies to be “serious” films like Saving Private Ryan or War Horse won’t find what they’re looking for in Red Tails, either. Although it has its intense moments, Red Tails is first and foremost a fun movie focused on heroism and triumph over adversity. In spirit and execution, it’s much more an homage to the patriotic propaganda war films of the 1940s than anything else. For some, that will mean they can’t connect to the film. But for those who can watch the film for what it is, and accept the spirit in which it’s offered, Red Tails delivers.

When it came to these guys, you had the opportunity to tell a clean story with over-the-top heroes and a simple “Star Wars” good vs. bad thing. The more comic book-y the better. … I feel like the history is easy to put out there, there’s already a familiarity with it, or at least the broad strokes of racism and segregation. Some people are going to like this tonal choice and some people are going to say, “Oh it should’ve been heavier and it should’ve been more dramatic.” But there’s a version of this that doesn’t have to be “Saving Private Ryan.” We can be “Star Wars,” as crazy as it is.

The aerial combat sequences are nothing short of incredible. The dogfights are breathtaking, projecting an intensity and desperation that made me tense in the safety of my theater seat. The strafing runs on a train and warship were even more effective at conveying a sense of speed than the broad backgrounds of open sky, reminding the viewer just how fast these pilots really are flying as they zoom toward their targets. Red Tails is right up there with Top Gun in its memorable fighter pilot action scenes.

The characters may not be deeply crafted personalities, but they are all vivid and familiar archetypes. The stern commanding officers, trying to do their best by their men. The by-the-book squadron leader who puts on a brave face but struggles with his personal demons. The wild and reckless right-hand man and best friend. The joker – literally; it’s his callsign. The laid-back guitar-playing crooner. The unofficial chaplain. The younger man trying to shake off the tag “Junior.” The grumpy mechanic who takes great pleasure in chewing out the skyjocks for getting his beloved planes damaged again. And the scarred, blonde-and-blue-eyed Nazi rival Pretty Boy, dripping with racism in his villainy. With morally gray characters and stories all the rage these days, it’s refreshing to watch a movie where you never have to wonder which side a character is on or what they stand for. 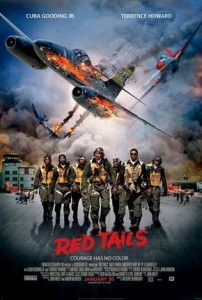 Although some will find it corny, I found the camaraderie among the pilots very genuine and their banter light-hearted and entertaining. Their bonds are shown not so much with handshakes and hugs as the teasing, laughing, and playing together that rings true to so much of real life. But there is also the occasional serious moment of emotional intensity when one man has let down another in some way, with the conflicts resolved with a maturity and professionalism expected of a soldier. John Ridley and Aaron McGruder – both of whom have extensive experience with serious, comedic, and satirical writing in their portfolios – did a great job bringing the pilots of Red Tails to life.

The film has its weaknesses, of course. At times the plot slows down a bit too much, and the pacing might have benefitted from getting to the next action sequence a little sooner. The love story between Lightning and Sofia also felt like it had a few too many scenes. The whirlwind romance is not just a movie cliché but a real-world facet of life during World War II, and the language-barrier hilarity certainly contributed to the levity of the film, but the subplot would have lost none of its resonance with a little less screen time.

As the quote from Aaron McGruder above suggests, Red Tails consciously keeps the focus of the story on the pilots and their triumphs, rather than on social commentary. But the film does not shy away from the racism of the period, with the supposed inferiority of blacks openly discussed at military conference tables. The stereotypes of the day pepper the white pilots’ dialogue, and a single, well-placed use of the “n-word” is enough to remind today’s audience that the epithet was just as much fighting words seventy years ago as it can be now. Most of the social commentary, though, is kept subtle. Lightning’s barely controlled desire to strike out at injustice and Easy’s quiet patience to prove the racists wrong by excelling in the air mirrors the philosophical debates between W.E.B. DuBois and Booker T. Washington before them and Martin Luther King, Jr., and Malcolm X after them. When the white bomber pilots ask to buy the black fighter pilots drinks in thanks for their success at protecting them, a couple of glances and a muttered “well, I’ll be damned” speaks volumes about how big the gulf in American society was in the era of Jim Crow and segregation. The simple notion that Italian girl Sofia seemingly has no racial blinders in her openness to love, while many of the white girls back home in America certainly would, is left for the viewer to infer rather than acknowledged in the dialogue.

Most powerfully of all, perhaps, is the unspoken juxtaposition of the movie’s opening quote, an unashamed declaration of blacks’ biological inferiority from a 1925 U.S. Army report, and the talents of the pilots. Lightning witnesses Pretty Boy perform a trick maneuver once, figures out how he did it, and turns it back around on an enemy pilot in a later dogfight. When everyone is telling them to flee rather than engage the new German jet fighters, the pilots turns the laws of physics in their favor, firing streams of bullets the jets fly right into and using plunging dives to make up the speed disadvantage against their faster opponents. Their triumphs not only made them heroes on the battlefield but also contributed to the ultimate repudiation of claims of racial inferiority that for so long carried such weight in American society.

There are plenty of great war movies with haunting stories, gruesome battles, and award-winning acting and writing. But few of those movies are anything as close to as fun to watch as Red Tails – and very few have made me as proud to be reminded of what people can accomplish when they’re pushed to do their very best, no matter the obstacles against them.