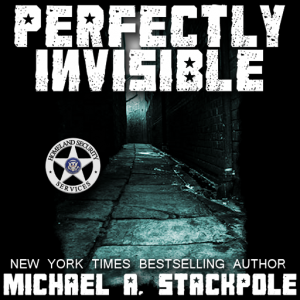 If you like the character dynamics on Fringe, tinged with a little of Castle, all wrapped up as police procedural, then you’ll find a lot to enjoy in Perfectly Invisible. It’s a novella, meant to be read in one sitting or over a couple of days, that follows the female protagonist’s first days with the Homeland Security Services, a government umbrella agency charged with making Americans feel safe. The story takes place in an alternate reality, but it’s still very recognizable in its similarities with our own time; this timeline diverged from current U.S. history when the 1993 attack on the World Trade Center succeeded in bringing the twin towers down.

Miracle Dunn is typical of Stackpole’s characters: she’s deep and intriguing from the very start, and it’s clear that if you keep reading some interesting details will come to light. She reminds me of Olivia Dunham on Fringe in being driven, successful, and special. All the other characters are introduced through her eyes as she and her new HSS team try to unravel a murder scene that turns out to be more than meets the eye.  Along the way to solving the case they uncover subterfuge, corporate espionage, cheating spouses, and a high-stakes scandal.

I found the supporting characters interesting, and each one was recognizable and different.  My favorite was Fyn, the former military man who slinks undetected in and out of Miracle’s world. He’s meant to be the strong arm of the team, and in many ways he reminded me of two of my favorite Star Wars characters that Stackpole brought to life – Jag Fel and Corran Horn.

You do have to pay attention in this book, just like in many police procedurals, or you may miss something. The pace and style of the writing help, in that it’s crisp and invites you along, although it’s not quite as tight or clean as I’ve seen from Stackpole. No matter, this is a good read and well worth the price. Perfectly Invisible is intended as the jumping off point for future stories, and I’d definitely be interested in reading more about Miracle.

On my brownie sundae scale, I’d say this is a sundae minus the brownie – not as a criticism, but only that it’s a novella and consequently has a little less content than a full-scale novel.  Sometimes for dessert, though, you just want a little scoop of vanilla ice cream and a little drizzle of decadent chocolate, and that’s just right for what you’re looking for at that moment.