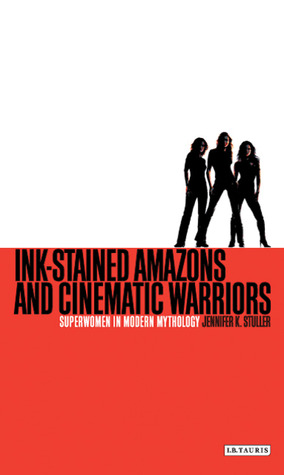 This book is a must-read for anyone who wants to learn more about superheroines and other powerful female characters in comics, television, movies, and beyond. Maybe you’re a person who writes fiction, whether professionally or just for the pure fanfictiony passion, and wants to see what makes well-crafted female characters tick. Maybe you’re a geek girl searching for what molded you. Or maybe you love – or like, or right now are just intrigued by – a genre-crazy gal. Stuller condenses almost a century’s worth of superwomen and their great (and not so great) portrayals into 160+ pages of study, followed by another 70 pages of resource material. Ink-Stained Amazons uses one woman’s lifetime of experience to scrutinize how female characters have been represented in fiction.

Stuller manages to balance her emotional connections with the subject material with an objective academic perspective. The message of the book comes through loud and clear: This is where we were, this is where we are, and here’s my knowledge-base and the brain-trust of a lot of other smart, strong women – now go use it to make things better for all of us. Sure, it would be ideal if equality could happen with a snap of a finger, but the fact is no magic, instantaneous fix exists.  Stuller acknowledges that change is a work-in-progress, then uses details and factual discourse to show what has and hasn’t been done right by superheroines in the past.

Ink-Stained Amazons is obviously a labor of love for superheroines and the everyday women who need superheroines to inspire them. Occasionally, Stuller allows the hurt over negligence or maliciousness on the part of creative parties to leak into her writing, but she never lets the tone stray to angry. Instead, she uses an academic study of the subject matter to prove her point – that women have every right to feel dismissed and marginalized by the way superheroines have often been portrayed.

While leveling criticism at the entertainment industry, Stuller also offers examples of stories and characters that get it right. Buffy the Vampire Slayer, Alias, and Wonder Woman are highlighted as storytelling that allows female characters to shine and be relatable to a broad audience. Across Wonder Woman’s seventy-year history, though, she has some not-too-great moments, as well.  Stuller also references lesser-known stories and characters, which I found particularly enlightening. Now I have more adventures to take with strong female characters that I otherwise wouldn’t have known existed.

If the title has you apprehensive because it sounds like feminist rhetoric, well, that’s what it is – but I’ll admit, I had some of those same reservations myself before I read the book. I am a woman who dislikes the sometimes vicious clashes among women more than I do wading into fandom discussions that are still peppered with misogynistic undertones.  Women are inscrutable to men, and the things men say can make us hurt, but women do understand each other, and when the claws come out they can slice into the underbelly of your soul with assassin precision. Just because someone’s a “feminist” (self-proclaimed or not) doesn’t automatically mean they’re more aggressive or combative than anyone else, and Stuller’s book is the perfect proof of that. What she does is create a common ground for understanding from the female perspective, then she sets it out there so that everyone can understand that all of womankind experiences a shared suffering for being a “she” – and equally desires and deserves great tales to lift our spirits, just like men.  Most importantly, though, throughout the course of the book she doesn’t judge women for their tastes or their preferences, or insist that anyone agree with her point by point. Stuller simply lays out her own experiences as a geek girl, ambassador, and historian, then has the bravery to let the reader decide things for herself.

There are many great passages in the book, but I made myself choose one. I picked her closing for the “Women Making Myth” chapter:

Sex and gender do not and should not define us or what we do, but a combination of nature and nurture colors our lives, regardless. Who we are influences the stories we tell and the stories we want to hear.

In essence, this is a book meant to inspire women to accept one another and form a community like the women of Wonder Woman’s Paradise Island. At the same time, it manages to nicely remind the men of the creative Pantheon that the ridiculously gravity-defying supersuit, in its many incarnations, won’t save their hides, but rather the superheroine inside the suit.