LHR: Can you explain for the lay person the premise of your book, Star Wars: The New Myth?

My main academic interest is: what’s universal about human psychology? For well over a hundred years now, comparing world religions and folklore – myths – from all corners, has been recognized as a valid way to study that. The book is really just placing Star Wars in context of world myths. Not just to make some vague analogy to old stories, but to show how Star Wars has a rightful place among them. 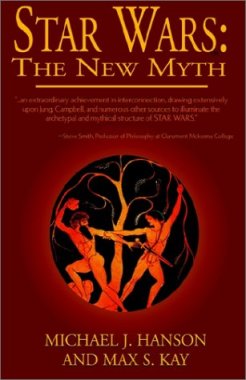 What are the elements of our psyches transcending time and culture? What is quintessentially human? Star Wars, like Superman or Batman, is recognized globally – its cultural limitations are much less than other stories. People from virtually every culture and creed (and every age) understand the conflicts of the story intuitively.

LHR: The premise of your book is that Star Wars is the Iliad or Odyssey of our times. Can you expand on that?

This is something only represented a little in my book, which was written shortly after The Phantom Menace, so the full scope of the prequel trilogy was still not well defined. In subsequent years it became clear that in some fashion Lucas has recreated the major movements of Homer’s two epics. The prequels are really the story of a war (Iliad), with characters functioning as pieces of that arc. There is less a sense of one main character – we go long swaths without Anakin or Obi-Wan on screen, and many characters constellate in and out. Ultimately, of course, we get the ultimate expression of Achillian rage in Anakin’s turning and his climactic fight with an ersatz Hector (Obi-Wan). By the time we get to IV through VI, the story becomes much more focused and insular. It’s about one character, Luke. For these films, what matters truly is an odyssey of maturation and experiential knowledge centered directly on him. Which, following the great war of the Iliad, is what the Odyssey does. But that’s just in terms of narrative structure. Symbolically, the prequels are the basic Yahweh story, and IV through VI are like the redemption Gospels.

LHR: How do the characters embody universal archetypes?

Archetypes are now a common part of the film and literary lexicon. I even recently heard J.J. Abrams speak of Spock and Kirk in terms of how he understood their “archetypes.” But that wasn’t the case when Lucas first conceived of the original stories. The brilliance of Star Wars isn’t just that Luke resembles Jesus, Siddhartha, or Lancelot. Those are really allusions. Lucas took universal conditions of the human psyche and made them relevant to the 20th century. Han Solo is, of course, representative of the American cowboy. But really we know some version of that same spirit is present in every culture – the nomad, the basic anti-hero. Leia simultaneously is this fairy tale princess and also a symbol of modern feminine strength. Anakin is a bratty, arrogant American adolescent (possibly even a reflection of today’s Fanboy, and probably why they have such a negative reaction to him), and yet he’s the essence of a sun god, of nobly born Achilles and his divine rage. Archetypes aren’t just about a linkage to past myths – they’re necessarily a gateway from ancient to modern and back again.

LHR: Was coming up with Star Wars as a topic for your doctoral thesis considered unconventional by your professors?

Actually, the Star Wars book was my undergrad thesis. My doctoral thesis was a dissection of the Batman mythos via the psychology of James Hillman (an important figure in Jungian academia). But, yes, the Star Wars book was unconventional – especially for an economics student! Which has also been an odd thing to me. Here we have these key cultural stories, connecting with the whole world as well as many religions do, and living on an on. Yet even ten years ago it was considered less high-minded to apply serious study them. That’s all changing now. Not only are scholars taking this stuff more seriously, but the best creative talent in the world wants to work with these characters. In my view, you can’t say you know twentieth-century literature, for instance, without a working knowledge of the Superman story.

LHR: How did you get the idea for your thesis?

Jar Jar annoys me as much as it does anyone, but I was frustrated by the critical and fan reaction to The Phantom Menace. In my view, no one seemed to understand what Lucas was actually up to! I love The Phantom Menace. To me it’s still one of the most daring and complex blockbuster-style films ever done. This is a film where the heroes get to a community full of slaves and leave them all but one! What other heroes get away with that? (Not even Indiana Jones!) The narrative and symbolic complexity of the prequels is vastly misunderstood and ground for tremendous contemplation. I was twenty-one when I wrote the book, with limitless energy. I had the inspiration and the anger – a 400 page book is easy with those two things.

LHR: You must obviously be a huge fan of Star Wars. What other ways do you express your fandom?

I’m afraid in many ways I’m not a very good fanboy. I don’t do a lot of dressing up or memorabilia collecting. For me, the movies are everything. I did, however, build the giant LEGO Death Star. Which is awesome.

LHR: For your research, you mentioned you had access to Joseph Campbell’s notes. What is something you found that surprised you?

There’s a reason Campbell’s theories on the universal heroic narrative are so popular even today: he’s one of the most brilliant minds of the humanities ever. His unpublished notes and lectures are just a continuation. His encyclopedic knowledge of myths and stories, and seemingly limitless insights, is staggering.

LHR: Any speculation for Episode VII?

Star Wars is about universal, archetypal cycles. The prequels and original films are much closer than folks realize. These new films will be too. Star Wars is also ultimately about the Skywalker family – pretty much all mythic epics are about families. Luke will become the Obi-Wan figure to Leia and Han’s children, one (or more!) will turn to the Dark Side, and Luke will die nobly in sacrifice at some point in this trilogy. Beyond that, I have no idea. But I can’t wait!

LHR: What can we look forward from you in the future?

Sometime this summer I’ll be publishing a new book– part satire, part serious argument – in defense of George Lucas, with Socrates as the principal character. It sounds weird, I know. And it is. But really fun.