At what point in your life did you become the Action Flick Chick? Was there a specific film that started your love affair with action movies?

It was a dark and stormy night around four and a half years ago. I’d just rented Rambo (IV) and popped it in the DVD player. Watching that film, filled with the magic that is John Rambo, rekindled my love of action films from when I was little.

What inspired you to write Action Movie Freak? Who is the book for?

Action Movie Freak is for all movie lovers, young and old. 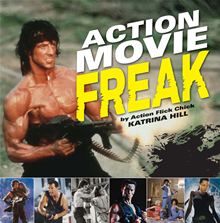 I wanted to write it so that other action aficionados, like myself, could enjoy a trip down action memory lane, and so that people who aren’t as familiar with the genre could get a taste of the best of what it has to offer. Action movies are awesome and require a lot of skill and talent, and Action Movie Freak is one way to spread that message.

When I first saw the breakdown of chapters – with names like The Hamburger, Bacon Strips, and Special Sauce – you really had me intrigued. I especially liked The Cheese: Parodies and French Fries: Sci-Fi Action Movies. How did you come up with the idea of grouping action movies by the elements of a Happy Meal?

I wanted to do something other than the usual chapter breakdown. I’d come up with a list of obvious categories- classics, sci-fi, etc., but I wanted to find a fun metaphor to relate it to. Since I’m obsessed with food, my first thought was a hamburger. The more I thought about it, the more it fit and just made sense- classics are the meat, buddy cop films are the second patty, and so on. Plus, everyone has had a hamburger, so I thought it was a very relatable and fun metaphor. I’m all about trying to find a way to work food into whatever I’m doing!

The book highlights Hell on Heels – women of action. Who are some of your favorite action heroines, both characters and actresses?

Characters: Sarah Connor from the Terminator series, Ripley from the Aliens series, Leeloo Dallas Mool-tee-pass from The Fifth Element, Charly/Samantha from The Long Kiss Goodnight, Anna from Dawn of the Dead, Selene from the Underworld series, and Peggy Carter from Captain America: The First Avenger.

As you chronicled all these movies in the book, did you see any trends that you think may change the future of action movies?

The two main things I noticed are the increase in the number of women in leading action roles now vs. in the past, and the increase in the amount of science fiction/fantasy action. Thanks to the proliferation of superhero films and the advanced technology to make movies, we’re getting to see all kinds of unbelievable action that audiences in the ’90s could have only dreamed of.

What upcoming movies are you excited to see in the next year?

The main films I’m excited to see are as follows: Iron Man 3, Die Hard 5, The Miami Connection (if you haven’t heard of this, you must look it up), Hansel and Gretel: Witch Hunters, The Last Stand, Bullet to the Head, The Fast and the Furious 6, World War Z, The Man of Steel, and GI Joe: Retaliation.

Action Movie Freak is available in stores and online now. Where are other places your contributions to the geek community can be found around the web?

Well, you can always find out about my latest doings over at my website, actionflickchick.com. My webseries, Geeks and Gamers Anonymous (GAGA), is on my Actionflickchick Youtube channel. You can also find my devastatingly witty and interesting articles at Fanhattan.com and MTV Geek, and I review iOS games at ArcadeSushi.com. Follow me on Twitter @ActionChick and Facebook at Action Flick Chick and Action Movie Freak.