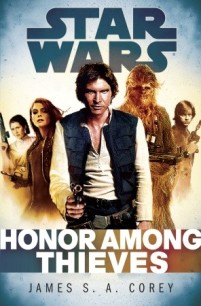 1. Honor Among Thieves is written nearly exclusively from Han Solo’s point-of-view. How did you prepare to write Star Wars’ iconic scoundrel?

We got a dvd of the first two movies and rewatched them several times.  We were pretty deliberately aiming for the version of Han from those movies.  There’s been a lot of Han centered material in the EU, but it’s usually early Han Solo before he meets Luke and Obi Wan, or later Han Solo when he’s married to Leia.  We wanted that transitional Han who’s not quite a rebel yet, still feeling the allure of his past life, and the funniest guy in any room he’s in.  The movies were our template for that.

2. You also made considerable use of Chewbacca in the story. Like the movies, you don’t provide a translation for his dialogue but only show Han’s responses. Although storytelling in prose would have allowed a different approach, why did you decide to write Chewie this way?

We worked through several versions of this.  And the truth is, we just couldn’t make a direct translation of what Chewie was saying not look silly.  Also, a lot of the humor in the movie interactions comes from inferring what Chewie said through Han’s response to him.  We didn’t want to lose  that.  Chewie and Han are very funny together, and a big part of that is guessing what the big Wookiee just said from how Han reacts to it.

3. Scarlet Hark is one of the more memorable original characters introduced to the recent Expanded Universe. What did you draw upon for inspiration in creating her?

Daniel was interested in seeing how the kind of kick-ass action heroine that became popular in urban fantasy would work in the Star Wars universe.  Also, we wanted to give Han a companion that could keep up with him, both in the action scenes, and in snarky dialog.  Scarlet is just as cocky as Han Solo, but they have different skill sets so they work well together in the story.

4. We also meet Baasen Ray, another underworld figure angling to take down Han, or make a big score – or both. How did you come up with this character?

Baasen is who Han becomes if he never meets Luke and Obi Wan.  We were playing with the idea of Han being pulled by two possible futures.  The one where he fully commits to the rebellion, or the one where he goes back to being the smuggler and outlaw he was before.  Baasen gives Han a window into what that second choice might lead to.

5. Unlike some Expanded Universe stories, Honor Among Thieves doesn’t feature a single key Imperial antagonist pursuing the heroes throughout the book. Rather, the Empire is more of a faceless presence constantly hanging over their heads. What led you to decide to portray the Imperial threat in this way?

Because it felt right?  Darth Vader is awesome, but we weren’t going to have it make sense to have him chasing Han through the book.  And creating a Darth Vader stand-in for one book felt a bit forced.  And since we made the choice to do almost the entire book from Han’s point of view, unless he personally kept running into the same imperial officer over and over, there was no window into a single bad guy.

6. Your original series, The Expanse, is also a space opera saga. Did you find that writing Leviathan Wakes and its sequels made it an easy transition to Star Wars? Was it sometimes tricky to keep the two separate?

Not tricky to keep separate, they’re very different projects.  But we definitely like writing about spaceships and space battles and fast paced action sequences, so that part crossed over well.  Star Wars allowed us to also write about alien races and hyperdrives and blaster pistols, all things that are  totally absent in the Expanse series.

7. For Star Wars readers who enjoyed Honor Among Thieves and might be interested in checking out your other work, can you tell us a little about The Expanse?

The Expanse is relatively near future space opera, with humans having settled the solar system but not beyond it.  Tensions are already running high between the three major political factions ruling the solar system when a strange sort of alien menace gets tossed into the mix.  Action and hijinks ensue.