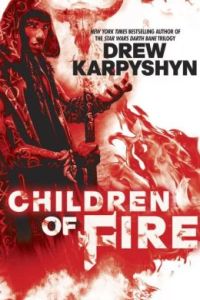 LHR: You’ve said that your novel Children of Fire has been a twenty year project. How did it evolve (or did it?) from your original vision?

DK: The idea first came to me when I was in high school – basically, I decided that I wanted to write a classic fantasy trilogy in the vein of Tolkien, Brooks or Eddings. So at first, it was very derivative and simplistic – basically what you’d expect from an inexperienced author. But as I matured as a writer, the plot and characters in Children of Fire matured and evolved, becoming more complex and nuanced.

LHR: I loved the characters in Children of Fire. They have a modern, contemporary feel. Is that something you consciously created?

DK: The purpose of my Chaos Born trilogy, of which Children of Fire is the first book, was to take all the best elements of classic literary fantasy and present them in my own unique way. Because of my work with video games, I’ve developed a very distinctive voice – someone once referred to it as a kinetic style of writing, and I think that fits. It seems to be well suited to a modern audience: folks who’ve grown up on a steady diet of television, films and game narratives yet still appreciate the extra depth you can only get in the novel form.

LHR: Do you have a favorite character or scene from Children of Fire?

DK: Well, everybody seems to love Scythe – she’s a very dynamic character. But it’s hard for me to choose; if I didn’t love a character, then he or she probably would get rewritten. I do like Roland, who most people will probably overlook: he’s not a main character and he’s just an average, ordinary mercenary who tries to do the right thing in difficult circumstances. But to me, those kinds of characters are as admirable as the more conventional heroes.

As for favorite scenes, I don’t want to sound arrogant, but there are a bunch of things in there I really enjoyed. If I had to choose one without giving too much away, I’d go with the battle where I introduce Slayer’s minions.

LHR: In your acknowledgements, you thank your family for supporting you while “slowly finding my way to my true calling.” When did you realize writing was your true calling?

DK: I’ve always loved writing, and even in grade school I was coming up with all sorts of stories and ideas. But it’s one thing to want to be a writer, and another thing to actually make a living at it. It’s easy to get off track in those years while you are learning your craft, especially as you struggle to find ways to pay the bills. I moved furniture, I drove trucks, I worked in banking, mortgages and mutual funds, but none of it was very fulfilling. It wasn’t until my job at BioWare that I actually found something I loved doing that could help me pay my bills. So it wasn’t really a matter of realizing I wanted to be a writer; rather, it was the struggle to actually make it happen.

LHR: You have written sequels for much-loved stories in the gaming industry. If you were writing Star Wars Episode VII, how would you do it? What original characters would you want to include?

DK: Wow – that’s a tough question. There is so much Expanded Universe stuff out there already, which makes it difficult to simply pick up the story from the original films. But I don’t think the movies can simply be a rehash of existing EU stories, lore and canon – much of that wouldn’t work well in a film and I think you could alienate part of the audience who weren’t familiar with the EU. But you also don’t want to upset the core fans who know the official canon of Luke, Leia and Han.

I think this is one of those questions I’m going to avoid until someone actually decides they want me on the project. But don’t worry – if J.J. Abrams calls, I’ll be ready to answer the bell.

LHR: Do you want to see a Revan spin off movie? Who would you cast as Revan?

DK: Honestly, I don’t think a Revan film would work for fans who aren’t familiar with the KOTOR games. Even the Revan novel loses something if you haven’t played them; there’s just so much depth and background you need to really appreciate the characters that it’s hard to play catch-up. And I don’t think making a film version of the original KOTOR is a good idea, either – the games is 30+ hours of content. Cutting it down to a 2 hour film would leave so much out it would hurt the story and enrage fans of the games.

Because of that, I just don’t think it will ever happen. Also, look at the economics – you have maybe 4 or 5 million Revan fans based on sales of KOTOR and the sequels. A big budget Hollywood film needs a world-wide audience of 30 million or more to be a hit, so there probably isn’t enough demand. (Sorry if I went a little dark side and crushed everyone’s dreams there.)

LHR: What can we look forward from you next?

Children of Fire is out August 27th, and I’m going to have the second book – The Scorched Earth – finished by the end of August. But I still have to write the final book in the Chaos Born trilogy before I move onto anything else, so it’s going to be another year or so until I start deciding what I want to do next.

I don’t usually plan too far ahead; I prefer to wait and see what opportunities present themselves. It’s possible I’ll do another Bane/Zannah novel, or maybe I’ll write another Mass Effect book. If the right offer came along, I could go back to video games or try my hand at film or TV. Or maybe I’ll just want to do something entirely different. I’m lucky to have so many great options, so whatever I decide to do at least I know it will be something awesome.