1. What was the most enjoyable part about writing Sabine: My Rebel Sketchbook?

Honestly, the privilege of getting into Sabine’s mindset. She’s young but she’s an expert with demolitions, she speaks multiple languages, she’s a great shot, and she has a passion for art. That’s a great mix of traits that goes beyond the stereotypical, and she’s not a perfect character either. 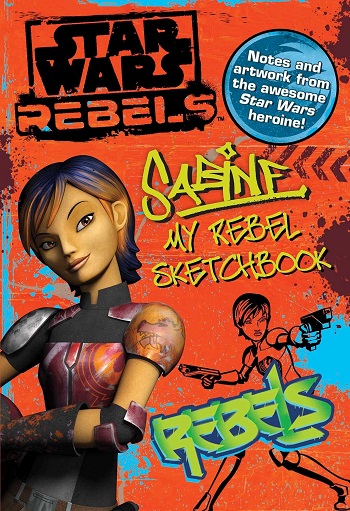 She has irritations and flaws that make her believable, and her passion for art is the intro to understanding her outlook on life. After trying to be Sabine for so long while trying to capture her voice I felt like I really got where she was coming from. I can’t think of any other character from Star Wars that has that street-art angle, and that fact alone is really remarkable.

2. How was it different (or similar) to the other Star Wars books you’ve written?

A lot of the Star Wars books I’ve written are encyclopedias and non-fiction guides, but in cases like Rebel Journal by Ezra Bridger or even The Jedi Path, there’s an opportunity to write in the first-person from the perspective of somebody living in that universe. Those are generally my favorite things to write, since it involves getting in somebody’s head. Sabine was a great character for this. Sometimes it can get a little creepy, like trying to capture the thoughts of an amoral dark side medical experimenter in Book of Sith, but I really enjoy trying to see events from another POV.

Definitely. Ezra is an orphan who puts up a tough front. Everything he says is very jokey and superficial, but in reality he’s covering up a lot of loneliness and pain. Sabine doesn’t have the happiest background either, but she’s already found her new family with the rebels aboard the Ghost. She’s confident with them, where Ezra is still unsure and trying to test his limits. So Ezra’s thoughts are more about his future and what’s going to happen with these new guys, but Sabine’s thoughts are more about the next art piece she wants to create. Sabine has 20% less internal angst than Ezra.

4. Many of your previous books are illustrated, but not quite like this one, where the images are so important in expressing Sabine’s moods. How closely did you collaborate with illustrator Annie Stoll? Did you make any tweaks to the images to suit your text or vice versa?

This book is really Annie Stoll’s book. She’s a wonderful artist who took my descriptions of what could appear on each particular page and reworked them to be something that Sabine might actually do. I really can’t emphasize this enough. Sabine is an artist, which means that she thinks in terms of images and spatial relationships. If this book was about Kanan instead, then I would probably say that I was the author and that Annie was the artist. But this is Sabine’s book! Annie is the real author—I’m just the words person.

5. Who is your favorite character on Rebels?

This sounds like I’m playing it safe, but honestly Sabine is my favorite character. There’s a lot that looks like something we’ve seen before, like her Mandalorian armor, or her twin blaster pistols, or her skill with explosives. But when you look at her age and her gender and her street-art passion, you realize we really HAVEN’T seen a character like Sabine before. How often do we see artists in Star Wars? How often do we see graffiti artists in ANY form of media who are committed to what they do and aren’t some lazy stereotype of the kids these days? Sabine’s great.

6. Having written about bounty hunters, Imperials, Sith, Jedi, and rebels, which is your favorite group?

Of the ones you’ve named, I had a lot of fun writing The Bounty Hunter Code with my friends Jason Fry and Ryder Windham. Because bounty hunters aren’t committed to either side and are all about getting paid, it was fun and relatable as a trio of freelance writers to get into their heads. Freelancing is the same all over.

7. If you could write a Star Wars novel about any character, who would it be?

Lando Calrissian! I really love Lando, and was super happy to see him pop up on Star Wars Rebels recently. What’s fun about Lando is that he combines the roguish smuggler’s charm of Han Solo with the sophisticated suaveness of a James Bond type. More Lando, please! The prequels really needed a Lando type.

8. Will we be able to meet you at Celebration?

Yes! I’m still finalizing my plans but I am planning to be at Star Wars Celebration in Anaheim this April.

9. Can you share with us one of the coolest moments you’ve experienced as part of the Star Wars universe?

Whenever I do a book signing or appearance and there are lots of young kids there, it’s fun to see what their connection to Star Wars is. A while back, it was usually the prequels. Then it was Star Wars: The Clone Wars. Now it’s Star Wars Rebels, and soon it will be The Force Awakens! It continues to amaze me how Star Wars has been able to reinvent itself for each new generation.

Two big releases I’m looking forward to are Ghostbusters: The Ultimate Visual History and The Art of Rocksteady Studio’s Batman: Arkham Asylum, Arkham City, & Arkham Knight, both due in September.