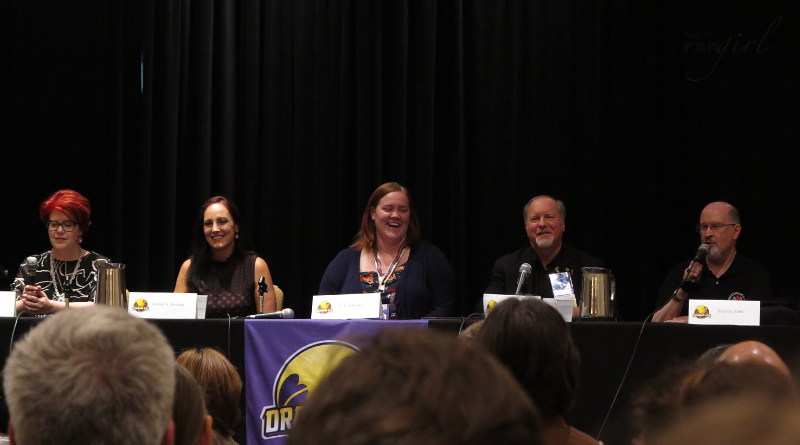 Dragon Con’s Star Wars track can be a great place to see and hear from people in Star Wars’s creative realm who aren’t always in the spotlight. While some panels take place in larger ballrooms, the track’s main room provides an intimate atmosphere. Star Wars book authors are no strangers to this space. And in 2017 there were some especially great opportunities to hear from a variety of authors, often more than once.

There were unique experiences such as the dual Phasma and Leia, Princess of Alderaan book release events with Delilah S. Dawson and Claudia Gray. Book and character-specific discussion was also available via a panel with Tim Zahn on Thrawn as well as an audience Q&A with E.K. Johnston, Claudia Gray, and Delilah S. Dawson called “Ahsoka, Leia, & Phasma: New Fiction“.

That “New Fiction” panel not only got to shine a spotlight on books with female leads but on the female authors who wrote them. The session started with each author reflecting on how they got the news they were first writing a Star Wars book. Possibly the most intriguing was Claudia Gray’s expansion on the fortuitous path that lead her to her first Star Wars novel.

She spoke of being in law school where she spent time reading and writing X-Files fan fic. According to Gray, it was during the brief window of the internet where people were nice to each other and stayed on topic. One of the people she met then beta read her writings and they soon discovered they had other fandoms in common – Star Wars, for one. Gray went on to finish law school while her editor got into publishing. Eventually Gray started writing Y.A. books although her and her editor friend didn’t work together. Her fan fic editor went to work for Disney. Disney bought Lucasfilm, and her friend ended up being in the room when Disney-Lucasfilm was talking about looking for a Y.A. author who also liked Star Wars.

While Gray joked that the moral was to futz around more on the internet, it was really neat though to hear about her journey – not only because it was a story I hadn’t heard before but because it was a good reminder to follow your passions, connect with those in your fandom, and you never know where you’ll end up.

Another great set of insights from that panel revolved around working with Lucasfilm, the story group, and secrecy. In general I’ve heard that the Lucasfilm Story Group doesn’t dictate all the plot points or outline an entire book but more so gives guidance and makes corrections for things an individual author often couldn’t possibly know Lucasfilm was planning. The authors here seemed to agree with that.

Delilah S. Dawson also compared the control process to a guessing game with vague answers. She described it as being in a room with an elephant you can’t see. You ask if it’s a horse. They reply it could be. In another panel Dawson and Gray would find out one of the only hard no’s they both got from Lucasfilm was on including Bothans in their stories. E. K. Johnston revealed that Lucasfilm doesn’t teach authors how the Force works – even if your main character is a Force-user. It was explained to Johnston as more spiritual than physical. She said she sometimes got a note back that said: “That’s not how the Force works.”

And when it came to the politics of Claudia Gray’s book Bloodline Lucasfilm did set some of the stage but she indicated that she brought some parts to keep it more exciting than Luke and Han have adventures while Leia is stuck behind a desk. She was initially told by Lucasfilm that Ben, Luke, and Han would not be in her book. Gray said she dug in on Han because she believed there was no way the events of the book could take place and Han wouldn’t be there. LFL let her have that one and in turn she wrote a Han and Leia relationship that worked for them but had no room for compromise.

“Amazing Star Wars Authors” was another great book-related and mostly fan-driven Dragon Con panel. The cool thing about this one was that its panelists included authors of the new Star Wars canon as well as authors of Legends. This group was comprised of Tim Zahn, Kevin J. Anderson, Delilah S. Dawson, Claudia Gray, and E. K. Johnston.

It was a panel that produced some excellent quotes such as:

Chief Chirpa is a stone-cold killer. He was 3 minutes away from killing Han Solo, which is closer than Boba Fett ever got. – Claudia Gray

I feel like Star Wars is history that really happened; it’s more real to me than Grover Cleveland. – Delilah S. Dawson

There were questions about specific characters such as an audience member asking Tim Zahn if he had any further plans for the character Eli Vanto from the Thrawn novel. Zahn indicated that he had some proposals with Del Rey but we had to be patient. It was a good reminder that the authors are as eager to write more Star Wars as they await the storytelling to open up around properties like Star Wars Rebels and the sequel trilogy films.

They discussed some of their favorite fan interactions. Gray reminisced about when Lost Stars was announced and she saw people reacting by saying they didn’t want Y.A. in their Star Wars. Her response was to wonder if they’d seen A New Hope since that’s a story of young people leaving behind the homes they’ve always known. So it was gratifying to her after publication to see that not only teenage girls who were used to reading about romance enjoyed it, but that there were also 40 year-old men writing to her totally invested in the characters and wanting to know what happened next.

Zahn mentioned the people who’ve told him that his books helped them through deployment and Johnston shared that getting that type of response surprised her but meant a lot. In all the authors seemed to be moved by the resonance of their work.

From getting pretty much free reign to tell whatever story they wanted to write back in the 1990s to being given only a single Vanity Fair photo of a character and no other info for a short story before a movie came out, these authors have plenty of intrigue to share about their time as storytellers for a galaxy far, far away. So it was especially interesting to hear their response when an audience member shared their disappointment on splitting older stories off as Legends.

Gray sees Star Wars stories as modern myths and like Arthurian Legends, they have different versions. Kevin J. Anderson talked about understanding that J.J. Abrams wasn’t going to read through 300 Star Wars books before coming up with a story for The Force Awakens. And Zahn painted a pictures of beings sitting around a campfire on a planet with spotty holonet access. At the end of the story someone tells you around that campfire, you don’t know how much of it really happened and how much is made up. You decide what to believe.

If you’re a fan of the storytelling process and Star Wars books, Dragon Con’s Star Wars track should be on your to-see list. 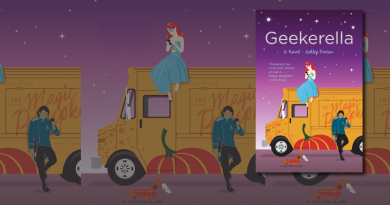