Pablo Hidalgo’s Rebels panel this weekend at New York Comic Con revealed concept art and a new character for the 2014 TV series. Hidalgo talked in part about the designs of the ships, which pay homage to classic Star Wars toys, and of the settings, which are based on Ralph McQuarrie’s art style.

I’m more interested in the characters. Tricia, Lex, and I discussed the tendency of female fans to gravitate toward and think about characters rather than machines or the details of lore, and I admit that the toys are not my area of expertise. I focused on two things that were revealed in the trailer: an antagonist, and a look at the planet on which the show starts.

The Inquisitor was revealed in a couple of still images. My first impression was that the lighting in the image of the Inquisitor and stormtroopers is very striking – all imposing blues and blacks – and that it fits nicely into the movies’ aesthetic for the Imperials. My second is that he looks like The Son. A lot of fans have pointed out this similarity to the manifestation of the dark side in The Clone Wars, and I think it’s a legitimate point to focus on. The white skin, the bald head, the red marks on the top of his head and under his eyes, the black clothes – they’re all the same. Darth Bane has a similar look too.

The Inquisitor appears to be a Pau’an, and it’s cool to see more fringe aliens. But the animation style, similar to that in The Clone Wars, makes the resemblance to The Son even more apparent.

Some fans will love this. The idea of a show that is very much like The Clone Wars but set in the Dark Times era is sure to light up a lot of fans’ eyes. I’d like to see the show establish its own direction, though. The team doesn’t seem to have taken any chances with the design, instead giving fans more of what they’ve seen before. It’s possible that the Inquisitor actually has some connection with The Son, but barring that, I think the design is bland. 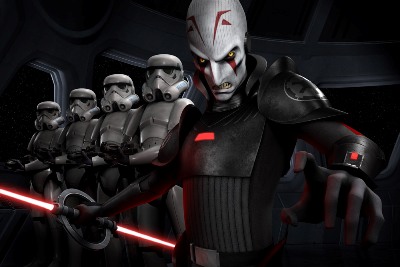 The use of an Imperial Inquisitor at all, though, is intriguing. Inquisitors hunt Jedi, or Force users who haven’t developed their powers, and the Force is an integral, dramatic part of Star Wars that I don’t think it should be without. A character like this is going to be a useful antagonist. The Inquisitor can take orders from Darth Vader without making the show focus on Vader himself.

I also thought it was interesting that a Pau’an Imperial character already exists – in the young adult novel Rebel Force: Hostage, a Pau’an in 0 ABY nearly tortures Leia before he is killed by an assassin.

Speaking of designs, a URL on the back of TIE Fighter pins given out at the Rebels panel leads to a recruitment website for Sienar Fleet Systems. The art in the background has dynamic color and composition. I like that Disney is using Imperial marketing to immerse fans in the world of the show. They set the tone, and provide fans with items to collect that look like they could come from the galaxy far, far away.

Another interesting idea to come out of the panel is that the Empire switched over to volunteer stormtroopers instead of clone troopers because recruits actually had less individuality than soldiers who were born with identical DNA. The volunteers have been taken in by the positive propaganda of the Empire. We saw in The Clone Wars how clones, as they grow up, change their hair or get tattoos to differentiate themselves from one another, and have different personalities that can lead to friendships and camaraderie, but also arguments and defection.

We know scraps of plot now – a Sienar factory opens up on the planet Lothal, which is, Hidalgo said, like the end of a rail spur that no one ever uses. It looks like the Empire might win people over by bring the prosperous starship-building industry to the region. We also know that the tone of the show will be similar to that of A New Hope – and that means that characters can die. In addition, Rebels is set 14 years before Episode IV, which means that potentially Luke and Leia are old enough to get involved with teenage protagonists. (This might just be wishful thinking.)

I’m looking forward to finding out who the hero characters are. The Rebels crew clearly has thorough knowledge of the Dark Times era, both in terms of in-universe history and real-world toys. The Inquisitor’s repetitive design and the look backward at classic toys makes me a little wary of the show trying too hard to be like The Clone Wars, which was always uneven in quality.

From a marketing perspective, bringing fans of The Clone Wars to Rebels because they want more of the same will certainly help Disney. But some new blood and unique designs could enrich Rebels.

Megan Crouse writes This Blog Is Full of Words and has also published poetry and short fiction. She is currently working in journalism and paying a lot of attention to pop culture, fandom studies, and Darth Maul. Follow her on Twitter @blogfullofwords. 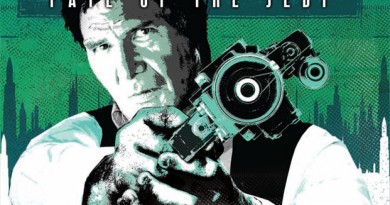 REVIEW: Fate of the Jedi: Vortex by Troy Denning