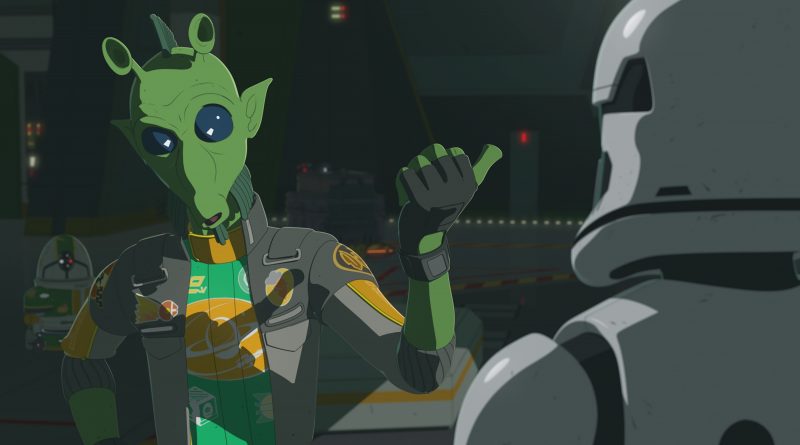 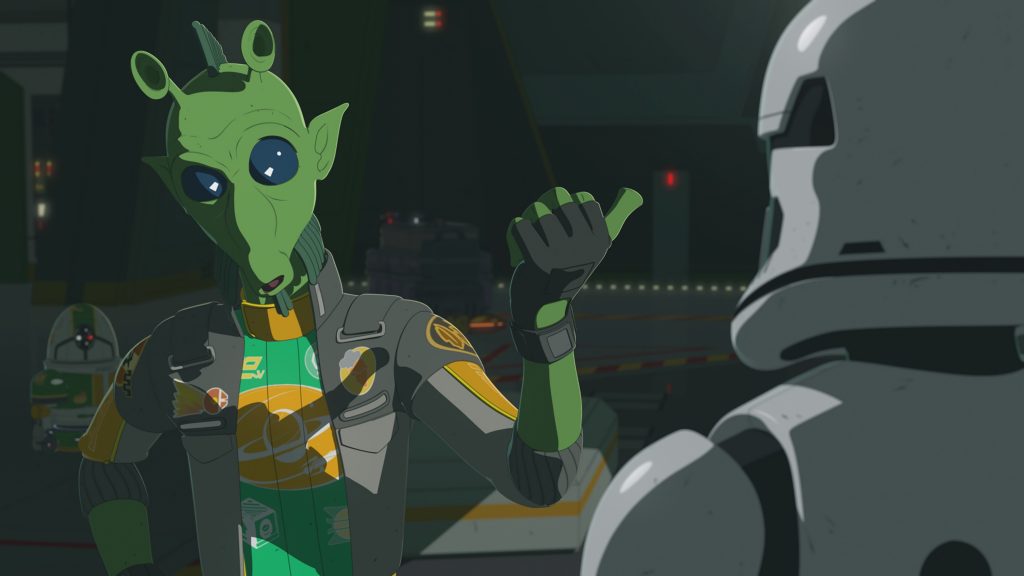 Star Wars has always been about politics. Be it in allusion, symbolism, or direct reference, the politics of the franchise have revolved around fascism and dictatorship, as well those opposed to those authoritarian philosophies. Because of the limitation of what can be crammed into a two hour film, the movies have done so most often in broad strokes. Instead, it was left to the expanded universe to pull and tug at these ideas to illustrate and teach in ways that the films simply cannot. The sequel trilogy is no different in this regard, notably The Force Awakens’ allusion to Nazi demonstrations and uniforms. In print, Claudia Gray’s Bloodline pieced together a galaxy that was sympathetic to the undemocratic ideals that bolster the First Order. Now Star Wars Resistance illustrates the insidious manner in which fascism undermines freedom. “The Disappeared” is not just a reference to characters vanishing on the Colossus, but to the actions conducted by fascists regimes in modern history, such as Chile’s Pinochet regime, where the term “disappeared” became an adjective to describe opponents to his government that were quietly snatched up and murdered. As a result of this comparison, the show had a duty to handle the subject of the First Order vanishing opponents seriously. Thankfully, it did so.

“The Disappeared” is written with three clear acts: an observation that resistance and opposition to the desires of the First Order lead to threatening ramifications; an acknowledgment that individuals who voiced opposition had vanished; and an effort to save them from actually disappearing in the episode’s climax. The writers wisely chose from a cross-section of the Colossus’ citizens, demonstrating that there was no favored status that offered protection. First, it was Hype Fazon, an ace of aces and resident of Captain Doza’s veritable ivory tower. Angered over a First Order decision to cancel races, Fazon ran afoul of stormtroopers impounding his racer. Next it was Aunt Z, the proprietor of the platform’s most popular drinking establishment, a character who carried the gravitas of being nearly part of its operating infrastructure. And finally the huckster Aleena, Grevel, who cheated Kaz in darts earlier in the season and would appropriately be considered a bad element. All three simply disappeared.

Perhaps most chilling was the theater when Kaz and Torra Doza ask about Hype. The stormtrooper who they approach listens carefully and does not disregard their request. He makes an earnestly visible display of radioing in and asking about the status of their missing friend. He then reports that Hype was recorded as leaving the platform, providing an excuse for his absence. It’s unknown whether the stormtrooper actually knew it was a lie or was lied to, but the terror flowing from his response is that it provides an answer to a mystery. Had Kaz and Torra not been willing to question this matter, as well recognize that Hype would never leave without his racer – a ship that was scheduled to be destroyed to reinforce the lie – the Rodian’s disappearance would have been accepted, and his abduction and confinement or potential murder never uncovered. Fascists and authoritarians leverage their own truths to support their actions, and “The Disappeared” exhibited this in full force. 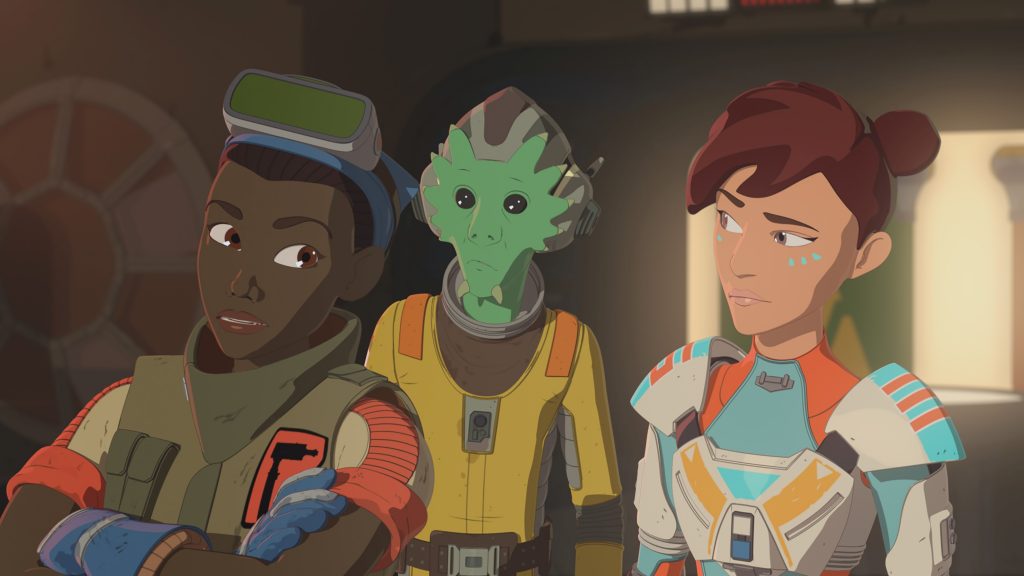 “The Disappeared” is important for Resistance because it’s a transitional episode for everything that’s to come. For the first time, our heroes outwardly resist, attacking the First Order in a manner that would have been unthinkable episodes earlier. Kaz and Torra through their actions, and Yeager and Captain Doza by their support of those actions, become a resistance on the platform to subverts the will of the First Order. Doza, revealed to be in surreptitious conversation with Yeager concerning the status of things on the Colossus, quite notably is quiet when his daughter, with whom he has repeatedly exhibited the role of overprotective father, makes the decision to take action to rescue her friends. This is not the Doza of an episode ago; this is a Doza who sees resisting the opposing force he invited onto the platform as something worth risking Torra’s life.

Like a rock resting in the middle of quickly moving tide sits Tam, still questioning Kaz’s clandestine activities and offering the First Order the benefit of the doubt. That an episode that includes an active recruitment campaign by the First Order and concludes with Kaz being placed under arrest also includes this dynamic with Tam might signify a turning point for our top mechanic. Will she choose allegiance to the shop, her friends, or to the First Order? (It’s also possible it’s all a misdirection!) While we still want to think the best of Tam, were she to side with the First Order, it would be a great example of how the common person can be swept up into autocratic governments.

In the background of “The Disappeared” is the softly spoken reminder that somewhere, elsewhere in the galaxy, the events of The Force Awakens are unfolding. A First Order troop transport appears in the episode as the means to first disappear our heroes’ friends and, later, to provide Aunt Z, Hype, and Grevel, their chance to escape. Aunt Z’s destination upon escape is Takodana, where a longtime friend of hers lives. (In the voice of Han Solo, “Hi Maz!”) Building up like a volcano, the events of the film will erupt to affect the galaxy, including the lives of those on a lonely refueling platform near the edge of known space.

As usual, Resistance’s animation is top notch, with our kudos going to the reflection of light on the night time waters of the ocean below the platform. Story-wise, this is the moment that the resistance to the First Order was truly born on the Colossus. From this point on, the show has earned its title, and the stakes can only grow higher. Thankfully, given the space that a television show has to tell its stories, “The Disappeared” continues Resistance‘s purpose of casting a spotlight on the First Order’s fascist tendrils that are quietly wrapping themselves around the platform and its people with intent to choke the life out of both.

Check out the latest podcast interview with Suzie McGrath, voice of Tam Ryvora, over at Fangirls Going Rogue. 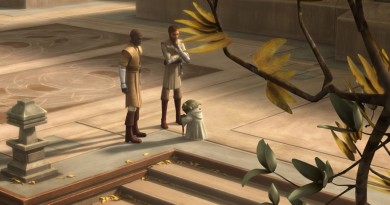 The Clone Wars: The Lost Missions Launch on Netflix