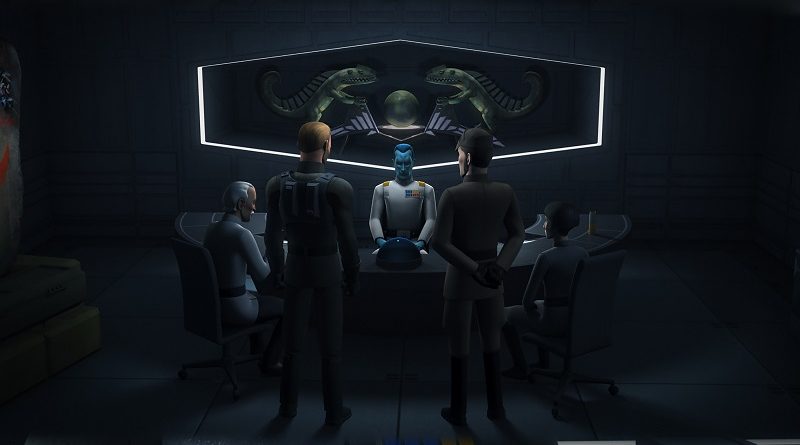 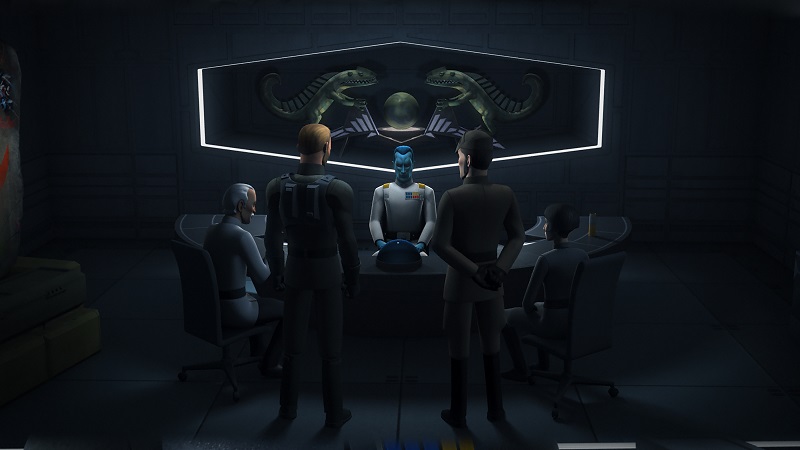 Among the characters on Star Wars Rebels to progress and grow, Agent Kallus has surprisingly become one of the most interesting members of the group. His introduction in the show’s premiere episode and those that followed was not that intriguing. Kallus came across as an Imperial stereotype blown up like a parade balloon, full of angry anti-rebel bluster, dismissive of non-humans, and callous even in his regard for his own men (in “Spark of Rebellion,” after the Wookiee rescue, he kicks a stormtrooper to his death). He was a shallow foil for our rebel heroes to overcome on a weekly basis. It all changed, however, in “The Honorable Ones.” Stranded on a frozen Geonosian moon with Zeb, Kallus and the Lasat did what almost always is the mark for a great Rebels episode, they talked. The Kallus who emerged not only had a more fleshed out character, but one irreparably changed by the encounter that opened his eyes to how the Empire viewed him and his loyalties.

That “Through Imperial Eyes” opens with a scene shot from Kallus’ perspective was an appropriate beginning  for an episode which, like “The Honorable Ones,” ended with a new understanding of Kallus’ place and role within the Empire. “Through Imperial Eyes” had little of the dialogue that marked that earlier episode. It opted to speak through action as viewers were allowed to see how skilled Kallus truly can be when dropped in a pickle; a pickle created when the rebels decide to unilaterally stage an extraction of the Fulcrum agent. The plan, kicked off by allowing Ezra to be captured while dressed up like a bounty hunter, rapidly spiraled out of control when Grand Admiral Thrawn opted to return to the space above Lothal.

Premised on the need to instruct the high ranking command staff of the search for the rebel agent, Fulcrum, Thrawn summoned the region’s top commanders to his command ship. Assisting in this regard was Colonel Wullf Yularen, sporting the white tunic of an Imperial Security Bureau officer, and matching in appearance his real life counterpart seen, but not heard, in the Grand Moff Tarkin-led meeting aboard the Death Star in A New Hope. For fans of The Clone Wars, Yularen’s appearance is one of those moments that thrill the heart – but that thrill comes with darker implications. 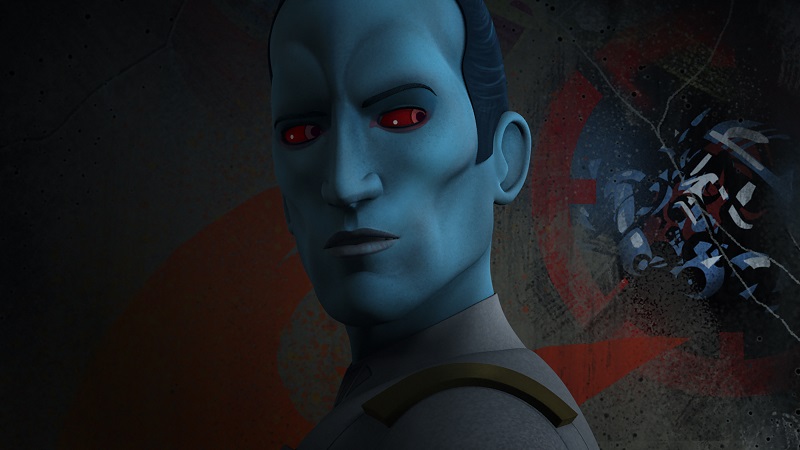 Once Kallus and Lieutenant Yogar Lyste (the commanding officer of the Imperial cruiser which captured Ezra) were informed of the spy search, Kallus’ brain immediately spun a plan to pin everything on the ever-unfortunate Lyste. This involved swiping Lyste’s credentials and using them to plant a trail of evidence that led to breaking Ezra out of the brig to sneaking into Thrawn’s office. Finally, it culminated in convincing Lyste that Governor Pryce was the true agent, leading Lyste to stunning the high ranking officer, who was attempting to capture Kanan and Rex upon their arrival to provide an escape from Thrawn’s star destroyer.

Kallus’ nearly succeeds, but for Thrawn’s implacable ability to recognize and analyze artwork – more specifically, Sabine Wren’s artwork on Ezra’s bounty hunter helmet. Through deductive reasoning, Thrawn quickly connects the dots that Kallus had failed to inform them that Ezra had been a prisoner, ergo, he was Fulcrum, a rebel ally. It’s prime Thrawn, and the first time he’s been able to show off his impressive intellect since “Hera’s Heroes.” By the episode’s end, our sideburns-sporting Imperial was neatly caught in a trap that he was oblivious to, with Thrawn deliciously contemplating how to use his newest asset to destroy the rebels.

“Through Imperial Eyes” accomplished two obvious tasks: first, it displayed Agent Kallus’ incredible ability to spontaneously plan and pull off a con meant to shift the focus of the Fulcrum investigation onto a hapless lieutenant; and two, it provided another example of the dangerous capabilities of Grand Admiral Thrawn’s intellect and ability to analyze. Underneath these two clear elements of the episode is another, more subtle story, that of Colonel Wullf Yularen. Appreciating Yularen’s first appearance on Rebels requires some familiarity with its spiritual prequel, The Clone Wars. 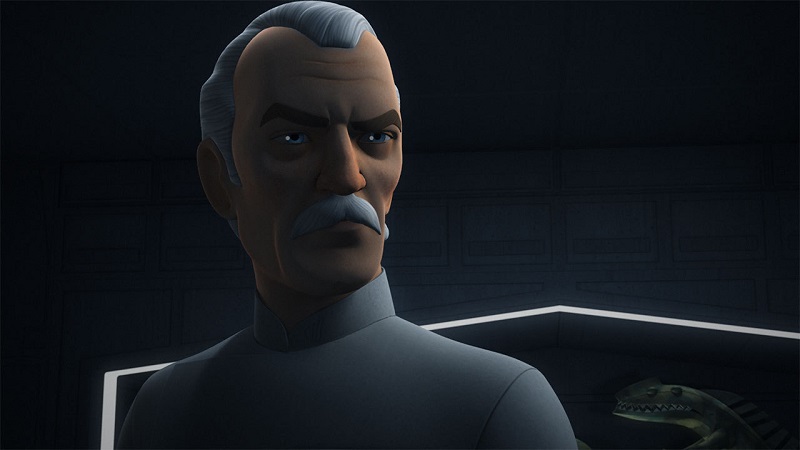 In The Clone Wars, Yularen served as an admiral in the Old Republic’s navy, under the command of Anakin Skywalker. Much of Yularen’s time on the show was spent remonstrating the Jedi’s tactics and tendency to disregard orders and protocols. Yularen, for all intents and purposes, was a little bit of a martinet.  Nonetheless, over the course of the conflict’s length, he fought the war on the bridge of a Jedi cruiser, observing the Jedi in one conflict after another as they fought the forces of the Separatists and Count Dooku.  Yularen had relationships with the Jedi and knew their contribution to the peace and security of the galaxy first-hand. While no material ever discusses the matter, Yularen had to also have witnessed the execution of Order 66 – Emperor Palpatine’s command to the clone troopers to wipe out the Jedi.

The criminalization of the Jedi and the adoption of the propaganda that the Jedi had betrayed the Republic were things that the clone troopers were forced to accept due to a chip implanted in their brains. For the non-clones, it was entirely optional, so far as one is willing to risk the wrath of the new leader of the Galactic Empire. In this case, we return to Yularen, and his role in “Through Imperial Eyes,” to appreciate the fact there are always individuals who in every sense of the word do not appear or act like monsters – in fact, seem common – who will happily partake in evil. Yularen is an average man who not only agreed to toe a new line of Imperial thought and practice, but as we learn in “Through Imperial Eyes,” is the head of the Imperial Security Bureau’s academy. He is the man who teaches others how to root out those who lack faith and belief in the Empire, which if we take into consideration the methods of the ISB explored in the expanded universe, includes torture, threats, and execution. By implication in “Through Imperial Eyes,” Rebels has produced an episode which warns against the chilling ability of the average, even boring, person to adopt the most terrifying aspects of evil.

“Through Imperial Eyes” continues Rebels recent streak of strong episodes as it marches toward the season finale this spring, raising the stakes for Kallus’ survival and placing one more ace up Thrawn’s sleeve in his endeavor to defeat the rebel pests of the Lothal region of space. On these attributes alone, “Through Imperial Eyes” is a solid episode, but with additional message about the mundane nature of evil in the presence of Wullf Yularen, it skips a notch up the ladder of good Star Wars.

For more on “Through Imperial Eyes,” check out the episode guide on StarWars.com. 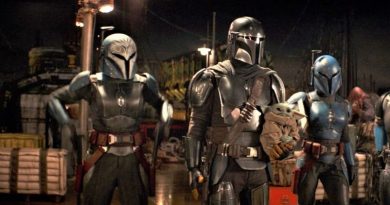 Hyperspace Theories: The Story of the Mandalorians