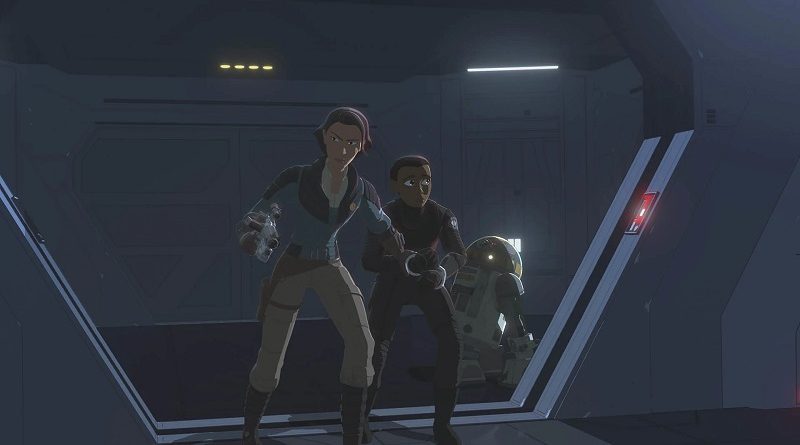 The return of Tam Ryvora in “Rendezvous Point” marked not just an uptick in enjoyability for Star Wars Resistance but possibly the best episode of the second season, and serves as a wonderful example of how the franchise should feature women. (Having more than one is always a great starting point.) It also introduced a new character, Venisa Doza, Torra’s mother and wife to Captain Doza, as well as her pyrotechnically adept R2 unit named Torch. Even more important, neither Venisa nor the decision that took her away from her family were criticized in the episode.

The episode begins in the middle of things: the Colossus in the center of a swarm of attacking TIE fighters, a First Order Star Destroyer bearing down, and the Aces flying for their lives. The how and why the platform ended up in this situation is unknown, even to the pilots (except one), but it quickly becomes clear that our heroes are waiting for someone to arrive. Unfortunately for their guest, Captain Doza gives the command to escape as the shields giving away seems more imminent than the arrival of whomever they were waiting for. The Colossus blinks away, and a second later a much smaller vessel blinks into existence, a heavily modified X-wing. Before it can make its own escape, the First Order’s tractor beam snatches the snubfighter and brings it aboard. As the prisoner is escorted to the detention blocks, she passes by Tam and Jace, leaving Tam to wonder if she had seen the Resistance pilot before.

Back on the platform, we have our B-story, which helps offer some background to why the Colossus was under attack and more information about the pilot. We learn that she’s Torra’s mother and that every year on Torra’s birthday, she returns from fighting with the Resistance to visit. It was this attempt to bring her to the platform which had led the First Order to finding the Colossus. We also learn that Venisa had flown with Yeager for the Rebel Alliance, had persuaded Captain Doza to defect from the Empire, and upon the rising specter of the First Order had been one of the first to answer General Leia’s call to form the Resistance. And best of all, at no point is Venisa’s decision to leave to fight called into question or criticized. This is important because it’s a decision that commonly always has been acceptable by men, while women were expected and portrayed as properly staying home. In the Expanded Universe, we have at least two other examples of mothers fighting, Shara Bey and Norra Wexley, but this is the first time a fighting mother (other than Leia) has made it onto a screen of any size. While the Aces throw Torra a surprise birthday party, this essentially sums up the B-story, as a device used to inform us of Venisa, and it works fine in this capacity. The more interesting story, however, takes place on the Star Destroyer.

Lured by her curiosity, Tam visits Venisa in the detention cell, where a conversation begins to cast light on Tam’s decision to join the First Order. Venisa quickly identifies Yeager’s former mechanic and begins to ask her penetrating questions. Why did you join the First Order? Is it giving you what you wanted? They are questions that Tam finds herself not having answers for, and they are exposing questions which are reflected in her own eroding self-confidence in defending herself and her new military family.  Season One of Resistance was built on Kas’s evolution as a hero. Season Two is building up Tam’s own evolution, and with total fairness it’s a far more interesting story to follow.

In “Rendezvous Point,” Venisa quickly takes Tam hostage with the help of her droid and manages to escape the First Order with aplomb.  n the process, she blows up several TIE fighters, causes chaos aboard the ship, and undoubtedly leaves Tam internally struggling to justify her decision to leave Tam Rvyora behind and become DT-533. Hopefully we will see Venisa and her fire-brand astromech again, and not have her jump to hyperspace be not only a departure from the enemy, but also a departure from the show.

In its treatment of women and in its number of women, Star Wars Resistance in this episode demonstrated that Lucasfilm’s animation wing is leaping ahead of its television and film divisions when it comes to inclusion and equity.  “Rendezvous Point” is a roadmap that hopefully will be a guiding source in future endeavors in the galaxy far, far, away. 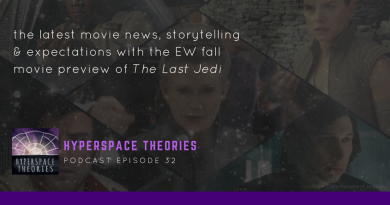 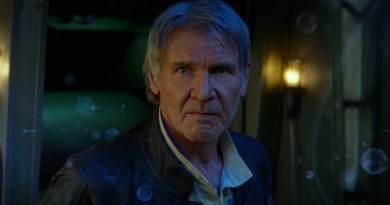 Hyperspace Theories Episode 16: The First Order and the Legacy Heroes in The Force Awakens