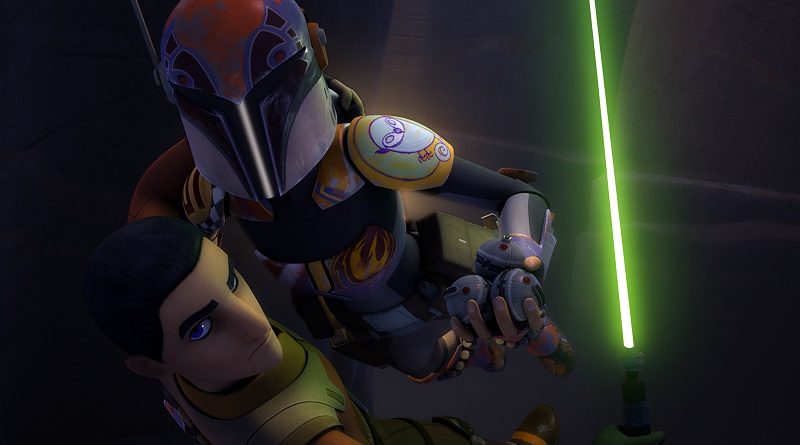 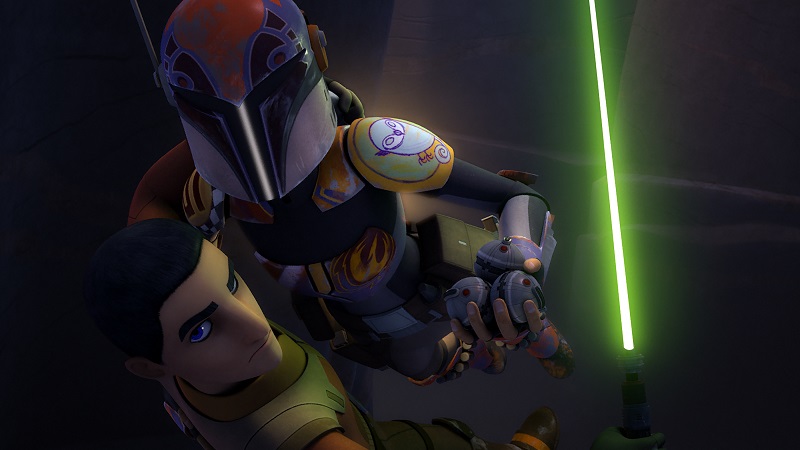 When it comes to the crew of The Ghost, our merry band of rebels, the team can be divided between those who have lost everything and have only the rebellion, and those who look beyond what they have to fight for the greater good.  Ezra and Kanan are prime examples of the former, while Hera best illustrates the latter, particularly with Season 2’s “Homecoming” and this season’s “Hera’s Heroes.”  Into that second group, we can now firmly add Sabine who enjoys her own “Homecoming” of sorts in “Imperial Super Commandos,” as the young Mandalorian is given the opportunity to convince an older member of her people of the need to fight the Empire on a greater scale than simply one’s homeland.

The episode opens with Sabine Wren pitching a rebels recruitment pitch to Fenn Rau, last seen in “The Protector of Concord Dawn,” still held as a prisoner by the rebels to ensure safe usage of the hyperspace lanes near Concord Dawn.  The pitch comes across a 3D game board, a Mandalorian version of chess or go, with the older Mandalorian chiding Sabine for being away from their home for too long and losing touch with her people.  For our own purposes, we can envision Cham Syndulla saying much of the same to Hera, and like “Homecoming,” “Imperial Super Commandos” follows some of the same beats, from a surprise betrayal by the older warrior to their finally coming around to the good of the rebellion by the end of the episode.  Unfortunately, given that “Homecoming” was built around a father-daughter dynamic, the emotional pull is not nearly as strong, and the character development not nearly as deep.  This is forgivable, given that the episode serves expressly to setup a much more exciting look into Sabine’s past through her relationship with her mother in a future episode.

The general premise of this episode follows Fenn Rau, Sabine, and Ezra going to Concord Dawn after communications with Rau’s warriors fall silent.  They quickly discover Rau’s base had been attacked and his fighters killed, and just as quickly, that the perpetrators are Mandalorians who have sworn allegiance to the Galactic Empire.  At the lead of the group is Gar Saxon, who was initially introduced as a member of the Mandalorian terrorist group, Death Watch, in The Clone Wars, and through the course of that show ended up siding with Darth Maul. Saxon’s last appearance was in Dark Horse Comics’ Darth Maul: Son of Dathomir comic, continued that trend.  Now almost a generation later, Saxon has climbed the ladder of power to become the Empire’s viceroy on Mandalore, and in the eyes of a traditionalist like Fenn Rau, a traitor to the Mandalorian  throne.  As a member of House Vizsla, Saxon’s label as traitor calls back to Fenn Rau’s fighters according Sabine the same title in “The Protector of Concord Dawn,” as Sabine is also House Vizsla.

It’s through Saxon in which we are provided clues into Sabine’s future storyline with her mother, such that the Wren matriarch is aligned with the Empire, quite possibly due to Sabine’s departure from the Imperial academy and subsequent defection to the rebels.  While this information is treated as nearly scandalous, Saxon smirking at Ezra over whether Sabine had shared it previously, it doesn’t have much of an impact on Sabine’s character.  Instead, it pops up like a clearly written road sign for future exploration of Sabine’s character, an especially welcome development given the missed chance to do so in “The Antilles Extraction,” from earlier this season. 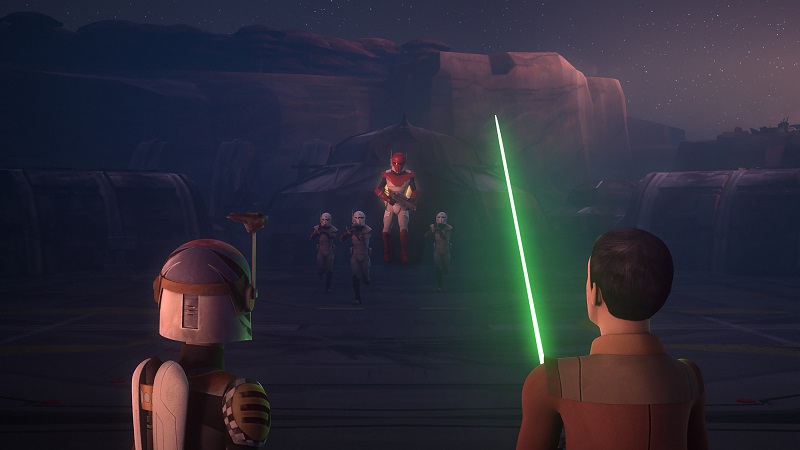 “Imperial Super Commandos” concludes with our heroes escaping and Sabine proving that she’s both a strategist and a valid possessor of the best Mandalorian values, two things Rau had questioned at the beginning of the episode.  In addition to his praise, Rau also commits to the rebellion, and undoubtedly, will play a major role in the remaining part of this season to nudge the rebellion, or at least Sabine Wren, toward Mandalore.  For the other characters in “Imperial Super Commandos,” not much can be said other than they were present and accounted for.  Ezra is given plenty of screen time and continues to be written as if the events surrounding his use of the Sith Holocron never happened, including the incredible power up in abilities he exhibited in the season opener.  Chopper remains Chopper.  This leaves Fenn Rau, who in the role of cultural father figure undergoes some character development, in the same ‘comes around to our heroine’s point of view’ way Hera’s father did in “Homecoming.”

In that Sabine’s greater character development is in the near future, “Imperial Super Commandos” can be forgiven for playing mostly straight with her character.  The beloved colorful Mandalorian  of Rebels played true to herself and is provided the opportunity to show that she can go head to head with seasoned Mandalorian warriors, be it on the ground in hand to hand combat or zipping through canyons with a jet pack, and win.  Given that the majority of armored Mandalorians in Star Wars have been men, it’s a very fine statement to show that Mandalorian women can be as tough and emerge the victor in a contest between the sexes.  In an episode which felt more like a lead into a more exciting episode, the Empire may have its traitorous Mandalorian ‘super commandos,’ but it’s Sabine Wren who emerged as the true super in this episode.

For more on “Imperial Super Commandos” check out the episode guide on StarWars.com. Star Wars Rebels returns on November 19th. Here is a sneak peek. 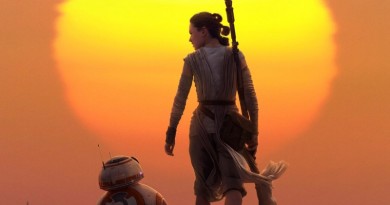 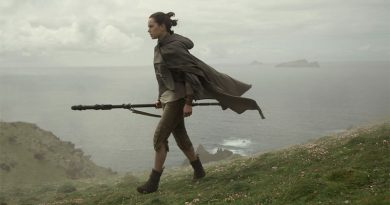 Rey At Risk Revisited: The Danger Signs From The Last Jedi