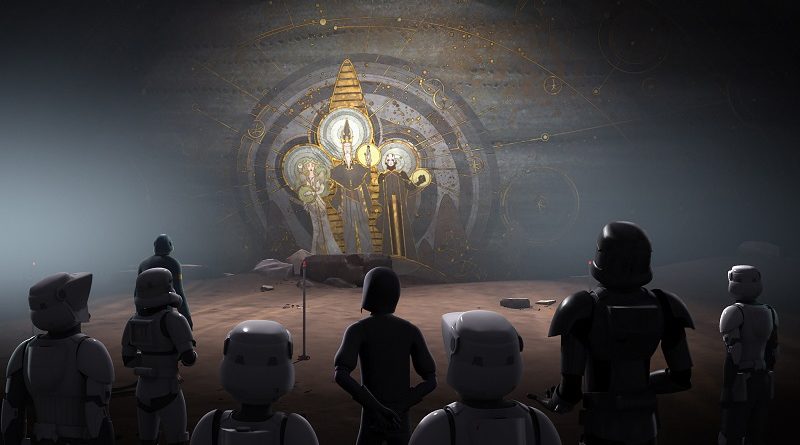 After last week’s Rebels revolved around loss of a team member, in its penultimate night the show opted to explain the survival of another beloved character – and in the process delivered the level of entertainment and quality expected in its final season. Once again pairing two episodes, “Wolves and a Door” and “A World Between Worlds,” the show returned to more balanced storytelling that not just promised a lot, but fulfilled those promises in the same time span as “Jedi Night” and “DUME.” Recently, Lucasfilm screened these last four episodes together for its employees and guests, and after experiencing them all, it makes sense. The imbalance created by the death of Kanan Jannus was fixed over the course of “Wolves and a Door” and “A World Between Worlds,” with the Jedi Knight receiving a much more proper farewell. Beyond Kanan, however, there was a lot more, so let’s jump right into it!

“Wolves and a Door” was the stepping stone into “A World Between Worlds,” a necessary, and still entertaining, prologue to the subsequent episode that sparked raucous debate among fans following the airing. Ezra informs the crew of the Ghost of the Loth-wolf mission assigned to him: to return to the Jedi Temple on Lothal and prevent the Empire from threatening the knowledge within it. Without hesitation the team agrees, and by quick excursion via magical Loth-wolves they cross hemispheres and discover the Empire has quietly excavated the earth beside the temple to reveal ancient Jedi artwork and carvings. Overseen by an appropriately creepy minister to Emperor Palpatine, the nighttime shot of the excavation cast reflections of Spielberg’s Raiders of the Lost Ark (with other allusions to come to the film). 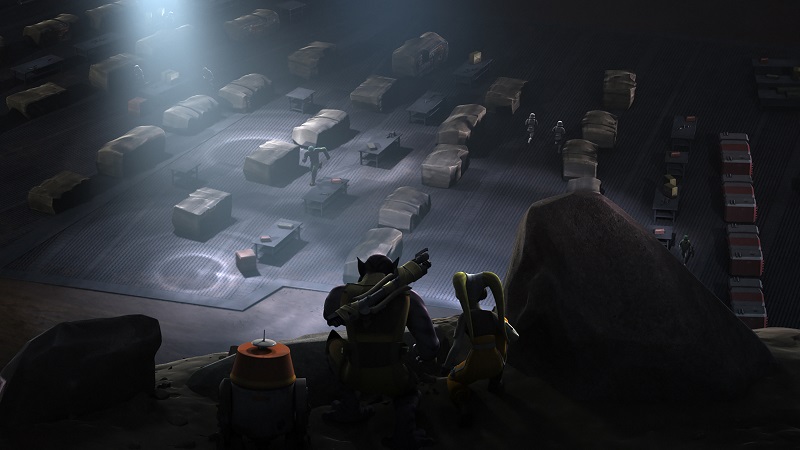 Ezra and Sabine “borrow” scout trooper armor and infiltrate the site, while Hera, Zeb, and Chopper hold back in support. As much as the story is definitely that of Ezra and Sabine, none of our other heroes feel cast aside or given something to do merely to be doing something. The mission feels like a team effort, which is Rebels at its best. Once in the midst of the Imperial excavation, we learn that the Emperor is making calls directly from Coruscant seeking updates, and that Ian McDiarmid returned to voice Palpatine himself, adding another level of wonderfulness to the episode. Additionally, we have our call back to The Clone Wars revealed in the form of a painting on the exterior of the Jedi temple – a mural of the Father, Daughter, and Son from that show’s Mortis arc. While everyone should watch The Clone Wars for how it helps expand the stories of the prequel trilogy, thankfully prior viewership is unnecessary to appreciate this lore from another show. None of the characters in Rebels express prior knowledge of what was revealed in the Mortis arc, and the writers don’t assume the viewers know much more than them, either. The result is a fun inclusion that appeals to fans of The Clone Wars and strengthens that earlier Force mythology.

One of the key differences between “Jedi Night” and “Wolves and a Door” is how the pairings of the two main rebel characters are presented. In the former, Hera had little agency and was literally moved from place to place by Kanan, except for a moment when she piloted a glider (under Kanan’s direction). This was an imbalanced perspective that somewhat reduced the enjoyment of that episode. In “Wolves and a Door” the balance between Ezra and Sabine is far better, with Sabine being critical to solving how a portal worked at the temple, both in opening it and closing it. Furthermore, she is treated as a knowledgeable expert by all the other characters, including the nemesis of the episode. The result is far more enjoyable and serves both characters, Ezra and Sabine, well.

But what about those wolves? Once Sabine informs Ezra how to activate the portal, Loth-wolves on the periphery come alive and form a hypnotic moving circle. Ezra leaps into a seemingly solid wall of stone within the circle and vanishes, while Sabine is captured by the Emperor’s agent. Tucked into the midst of the episode is a not so subtle reference that Kanan’s spirit has not quite moved on to become one with the Force, but it’s handled deftly with Hera simply slipping a hand to her shoulder as if in remembrance. The what and why of Kanan’s death and the Loth-wolves are then finally answered in “A World Between Worlds.” 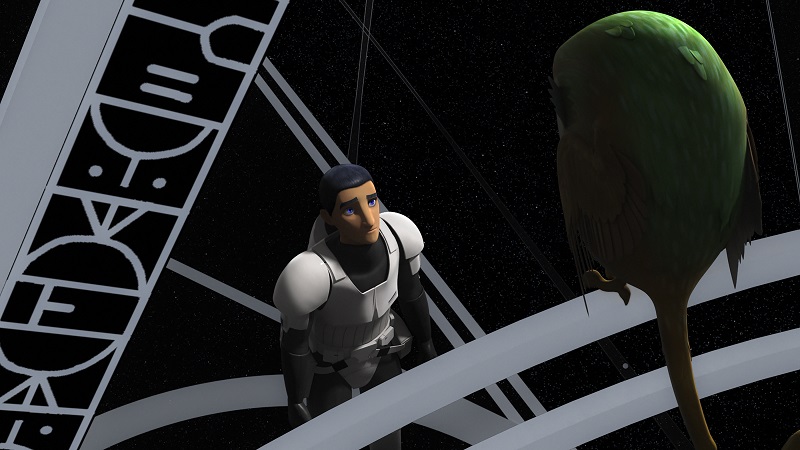 Every season of Rebels features a few episodes that stand out for their willingness to push beyond the realm of the viewer’s expectations, whether through bold character decisions or simply dropping a Bendu into unsuspecting laps. “A World Between Worlds” is one of those episodes in the show’s last season, as it accomplishes a number of feats. The first is pushing our current understanding of how the Force connects and binds everything together in the galaxy. We know from as early as The Empire Strikes Back that the Force can draw visions from the past and the future, thus indicating a connection to time itself. In the aforementioned Mortis arc, we see a Force-created reality that exists outside of time and in which physical matter can be shaped and shifted like Play-Doh. These aspects of the Force take on a new dimension (literally) as Ezra emerges from the Loth-wolf portal into a world of similar portals that connect not just to different physical places, but to different times, as well. That’s right, Dave Filoni took the leap of including a form of time travel – using the Force not just to witness past events, but to influence them – in the Star Wars universe.

In the process, Filoni finally revealed the “how” behind his whimsical t-shirt swap at the last Star Wars Celebration convention, when he went from wearing a shirt that read, “Ahsoka Lives?” to “Ahsoka Lives!” Through the power granted by this Force dimension, Ezra is led – potentially by the Daughter from the mural in the form of a green convor – to a portal where he pulls Ahsoka Tano out of her time, a moment right before Darth Vader may have been about to kill her in the finale of Season Two, into this intermediate place. While some may want to argue that Filoni altered the episode to bring one of his most beloved favorites back, it was a plan long in gestation as evidenced by art work released by Filoni not long after Season Two’s finale. In fact, as pointed out in the Rebels Recon, the origin of “A World Between Worlds” began quite some time ago in the writers’ room. The return of Tano was a delightful surprise: Star Wars can always do with more female characters, especially ones who are not killed off. Ahsoka’s role is immediately one of guide for Ezra, who initially believes that Kanan led him to this place to save him from his death above fuel tanks in Lothal’s capital city. Instead, as Ahsoka makes her own admission of her inability to save her master, Ezra realizes that the lesson that Kanan sought to bestow upon his apprentice and friend was knowing when to act and do what one must for the greater good. Does this foretell one more Force user’s death in the show’s finale? Most likely not, but it will likely be some sort of sacrifice on Ezra’s part.

The world between worlds, as Ahsoka described the portal realm, was permeated by quotes from all the major franchise films and The Clone Wars. The dialogue lifted from these sources serves to help provide an understanding of the how and why the reality existed – and beyond that, connects everything together, from Rogue One to Revenge of the Sith. This continual pull of the familiar was elevated when Ian McDiarmid returns once again in full Darth Sidious mode to attempt to capture Ezra and gain access to the portal. As the Emperor’s minister claims in the episode, this would give Palpatine power over the universe itself. Our heroes escape, albeit taking separate paths: Ahsoka returning to where we last saw her in the Season Two finale, and Ezra evading the Emperor by returning to Lothal. His return to Lothal and instant search for help from his friends was also a reminder of the better writing of these two episodes. 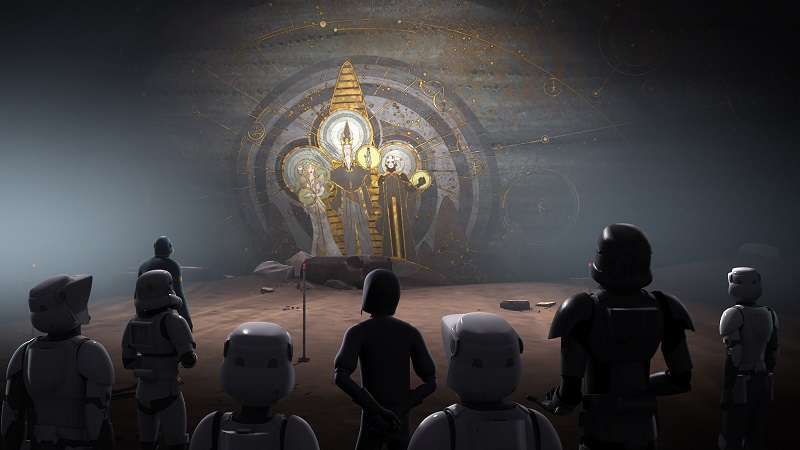 While Ezra wanders around in a Force netherworld, Sabine endures capture and quasi-interrogation through the Emperor’s minister. The minister treats her as an expert on art, which she is, and at the same time, it’s reminiscent of Raiders of the Lost Ark when the villainous archeologist Belloq attempts to win over Marian Ravenwood with graciousness that shifts into threats. Over the course of Sabine’s time with the minister, which began with proffered tea and ended with the painful butt end of a death trooper’s rifle, Sabine exhibits her knowledge and also learns how to close the portal. Meanwhile Hera, Zeb, and Chopper spend their time in this episode figuring out how to rescue Sabine, giving them purpose without sidelining them as ancillary characters (in a way how Sabine and Zeb were treated in the previous episode). In that capacity, Hera is the leader again, allowed to take the lead and guide Zeb in the ultimately successful rescue.

“A World Between Worlds” concludes with Ezra successfully closing the portal, which results in the wholesale destruction of the temple, the portal to the mystical Force realm, and the Imperial forces, reminiscent of a number of films in which the pursuit of forbidden knowledge results in the destruction of said knowledge (or at least access to it) and the antagonist (Indiana Jones and the Last Crusade being one example). Prior to Ahsoka’s departure, the former Padawan of Skywalker connected the white Loth-wolf referred to as Dume, to Kanan’s living will and the episode ends with the creature disappearing into mists, finally bringing the closure missing from Kanan’s death in “Jedi Night.”

“A World Between Worlds” is the type of episode which makes Rebels the show to watch because of its fearlessness in telling the story it wants to tell. The exploration of the titular world between worlds unabashedly asked the viewers to suspend their expectations and beliefs and remains at the time of this post highly debated among fans online. Despite the controversial decisions behind the story, both episodes balanced its main characters, offering perhaps the best example of a Sabine and Ezra pairing so far displayed on the show. The fate of Lothal, the beginning and the end of Rebels, will be decided in a three episode evening that will undoubtedly make determinative choices regarding the fate of both heroes and villains.  If “Wolves and a Door” and “A World Between Worlds” are any indication of what to expect, it will be a series finale fitting of the show. 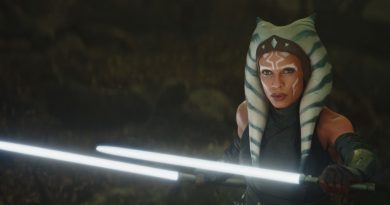 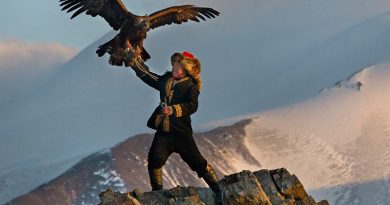 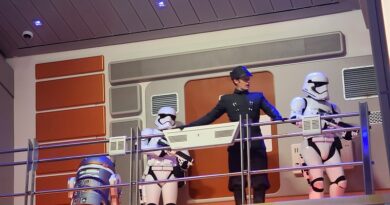