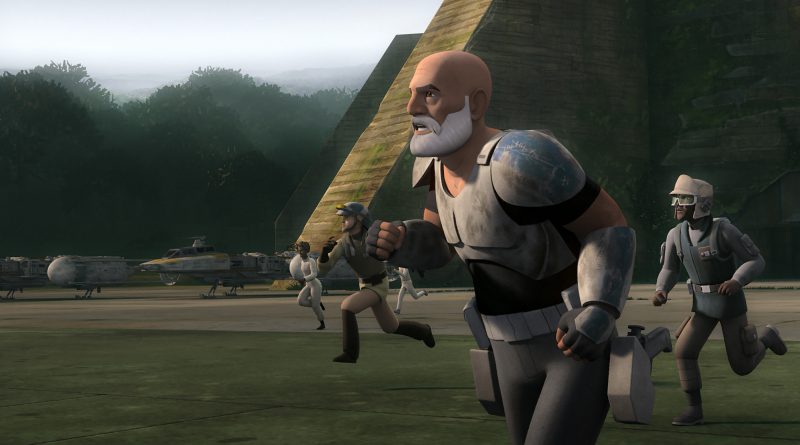 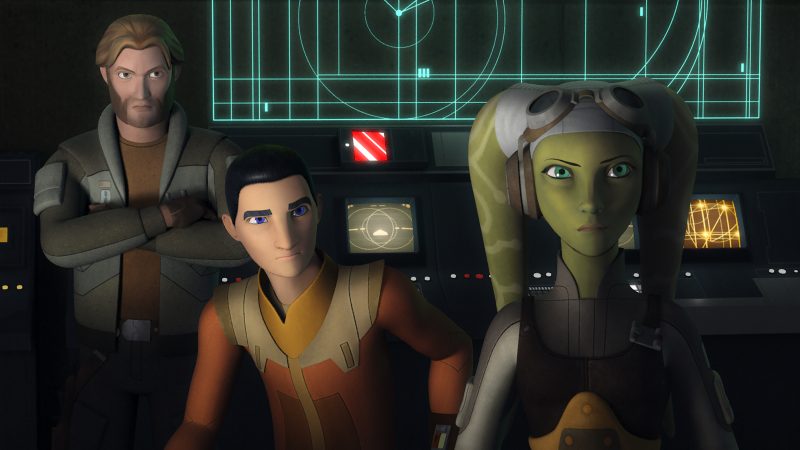 Rebels returned for its second double episode installment with significant callbacks (or is that call forwards?) to Rogue One, from having Saw Gerrera hot on the heels of the Empire’s secret super weapon to Mon Mothma illuminated in the light of the command room of the rebel base on Yavin IV. Unsurprisingly, the main writer behind this episode was Gary Whitta, one of the two individuals credited for story in Rogue One. “In the Name of the Rebellion” at a glance seemed like a more fun episode than last week’s excursion to Mandalore, which was weighed down by writing decisions related to convincing viewers that Bo-Katan Kryze was the rightful leader of her people. Part Two is written by Matt Michnovetz, who wrote the Season Three two-parter “Ghosts of Geonosis” that centers on Saw as well. Despite the excitement of Rebels bringing back familiar faces and locations, “In the Name of the Rebellion” suffers a similar problem, albeit one not nearly as noticeable.

In one perspective, “In the Name of the Rebellion” is similar to one of Whitta’s episodes last season, the “Wynkathu Job,” in which Ezra learns that Hondo Ohnaka is not necessarily the loveable rogue that the young Jedi believes him to be, despite everyone telling him as much. In this case, replace Hondo with Saw and for the purposes of Ezra’s role in the story, it’s very close to the same: Ezra having to learn, despite what everyone tells him, that Saw is not necessarily a great guy. While Hondo’s motivation is chiefly greed, Saw lives to fight the Empire. Any. Way. He. Can. Looped into this passion to take the fight to the Emperor’s creation is an obsession with discovering information on the Empire’s secret weapon, which we all know to be the Death Star. It’s his amoral effort to combat the Empire which becomes the focus of the episode, complete with a face to hologram face confrontation between Saw and Mon Mothma arguing over why the means matter when it comes to the ends. 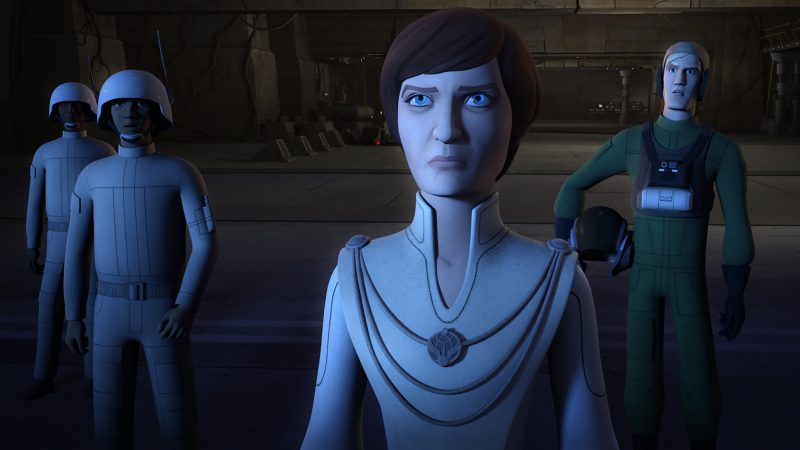 Tricia Barr broke down this moment with the succinctness that Twitter demands: “Although adults can infer that Mon Mothma is right, that is never resolved overtly in the two-episode arc in a show for children.” She also pointed out that the episode implied that the show’s protagonist, in this case Ezra, for the most part chooses to side with Saw in a debate over morality in conflict, i.e., avoiding civilian targets, ignoring rules of engagements, and so on. For the older viewer, we know who is in the right – this is a principle that has been established since Saw’s character was dusted off for a return in Rogue One – and it’s Mon Mothma and the Rebellion against the Empire. There’s also the matter that Saw literally talks down to Mothma while trying to recruit her rebels to join him in his fight. This actually happens at the end of Part One when Sabine and Ezra agree to join Saw on a mission after he rescues them.

In Part One, the women characters are spoken to and somewhat undermined. Kanan and Hera are in the Ghost being pursued by TIE Defenders. In an effort to evade the new fighter craft, they descend into a cloud bank that envelopes stone pillars. In that scene, Kanan essentially tells Hera what to do and explains to her that he will help her fly. This disregards the fact that Hera has been established as one of the best pilots in the rebellion, much less the galaxy. The same scene could have been written nearly identical, but with Hera requesting Kanan’s assistance to guide them. This would have not undermined Hera, as she’s the one requesting help, not being given it without asking. Even earlier, when the team arrives at their destination, Kanan tells Hera to turn on the systems which will hide the Ghost from Imperial eyes, something that Hera would have naturally known to do. Through it all, Hera is the ranking officer, who never is provided the rightful position of commanding the mission. Hera is not the only female character who is given a slight in the writing, there’s also Sabine.

The mission in Part One is to tap into an Imperial listening station to hijack transmissions to learn how to avoid Imperial Navy traffic. Like most rebel missions for the Ghost crew, it quickly fouls up, this time when an Imperial cruiser appears in the sky above. Sabine issues an order to Chopper to reroute a communication channel to allow the ship to speak with the listening station directly. Ezra claims to have a better idea, and over Sabine’s objection, goes with his idea. It’s a shift in leadership, which began with Sabine in charge, and results in Ezra undermining everything. As in the scene with Hera and Kanan, the exact same result could have been had without Ezra simply ignoring Sabine. Thankfully for the pair, Saw arrives with Two Tubes in a U-wing and rescues them, while blowing up the transmission dish – leveraging his words earlier with Mon Mothma with explosive results.

Part Two of “In the Name of the Rebellion” focuses on Saw, Sabine, and Ezra discovering a giant kyber crystal being shipped on a civilian cargo ship. Here Ezra learns that Saw has no problem allowing prisoners to remain prisoners because doing so makes it easier for him to follow the mystery of the Imperial secret weapon. Sabine is present throughout the episode, but it’s truly a story designed to play Saw and Ezra off each other – and similarly to the end of the “Wynkathou Job,” it concludes with an almost good-natured resolution between the pair. Ezra learns that Saw is not necessarily the leader he wants to follow, but his reactions toward Saw are subdued. One can argue that Saw is never really condemned for his actions in the two episodes, almost as if he’s Dennis the Menace, dropping in to stir up problems before skipping away with a wink and a smile, to the surrendered chagrin of his neighbors. This belies Saw’s existence post-The Clone Wars as a warning against zealotry and accepting the amoral path of justifying one’s actions by their results. It’s this behavior that ostracized Saw from the rebellion during Rogue One and has followed him through much of the storytelling developed ever since. As a result, the writing failed to condemn his actions severely enough, from a certain point of view. Arguably adult audiences can judge Saw’s actions; the criticism is that the message is softened for the child audience a show on DisneyXD is bound to serve. 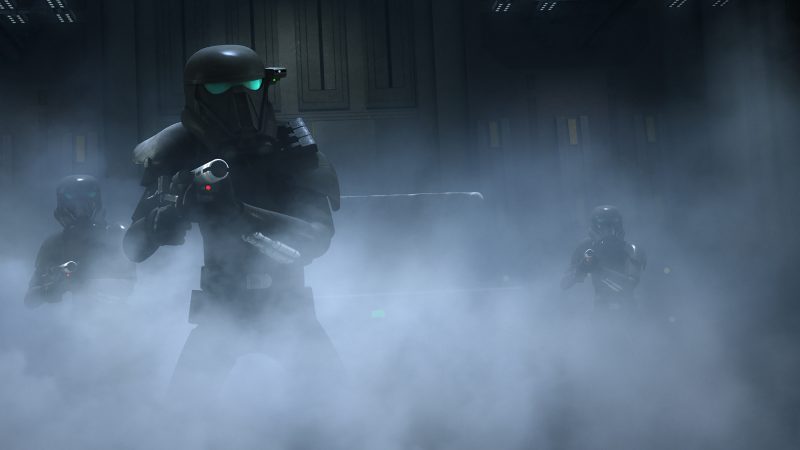 For the flaws already admitted, “In the Name of the Rebellion” still included wonderful moments, such as the conversation between Mon Mothma and Ezra on why the Rebellion could not immediately return to Lothal to free it of the Empire. Despite the manner in which the conversation between Saw and Mothma was handled in terms of offering guidance on who is right, Mothma’s passionate condemnation of Saw was beautiful, and could only have been improved had there been a callback later by Ezra or another character acknowledging that she had been right. The animation in the episode, particularly the backgrounds, the sets as you might call them, were exemplary. One could tell that great care had been given to recreate the command center of the rebel base to replicate it as it appeared close to the time of A New Hope. The work of all the actors, per usual, was well done, and it was a welcome surprise to have veteran voice actress Jennifer Hale play the Death Trooper Commander. “In the Name of the Rebellion” offered a good story, an exciting glimpse of the Empire’s awful plan slowly coming to fruition as the rebellion that would one day destroy it also continued to emerge from the jungles of Yavin IV.  The ingredients are there for Rebel’s last season to have fantastic episodes, let’s just hope the writing can kick it up a notch to pull it off.

For more on “In the Name of the Rebellion,” check out the episode guide and Rebels Recon at StarWars.com.

Rebels Recon: Inside “In the Name of the Rebellion” on Disney Video 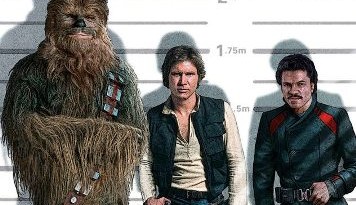 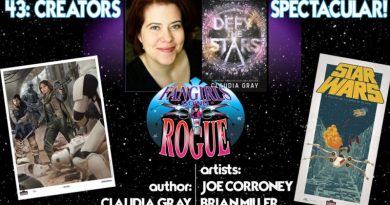 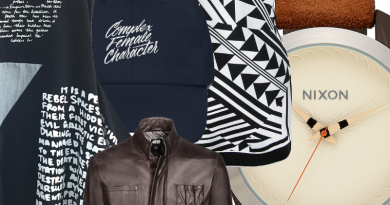 One thought on “Star Wars Rebels: In the Name of the Rebellion Review”