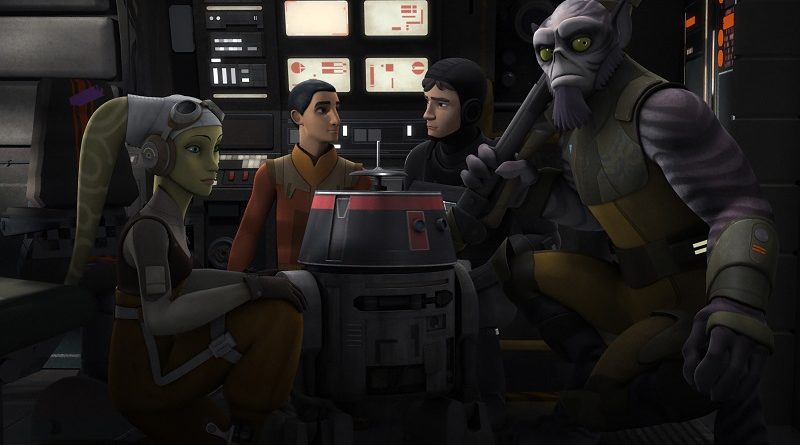 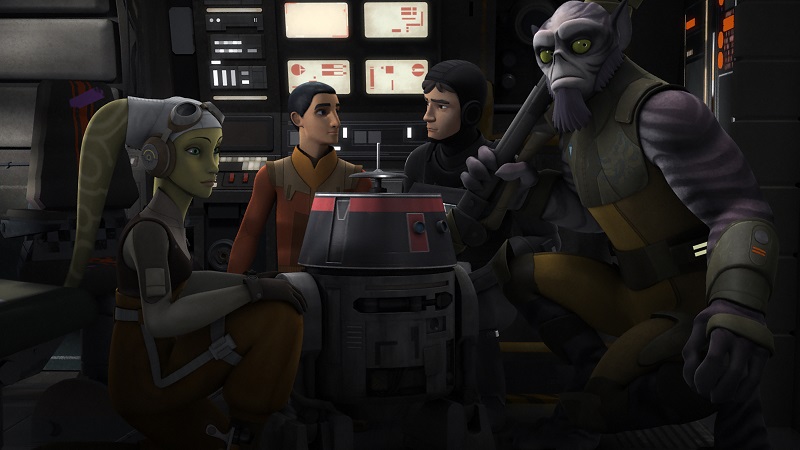 “Double Agent Droid” is a rare example of Rebels Season 3’s strong back half missing a beat, and not because the episode generally had little to do with the larger remaining storylines of the season. Built upon the dynamic odd-couple pairing of AP-5, our favorite Alan Rickmanesque inventory droid, and the wild child of astromechs, Chopper, “Double Agent Droid” had the opportunity to reflect the success of the pair’s introduction to each other in last season’s “The Forgotten Droid.” That episode was buoyed not only by AP-5’s appearance, but also was the first Rebels episode to cast the philosophical eye at the place of droids in the wider Star Wars galaxy, which delicately balances between robots built to perform specific duties and sentient beings enslaved for the benefits of their owners. It was an extension of the same question of identity that was the focus of Marvel’s one shot C-3PO story, and in “The Forgotten Droid” it was part of not just a character developing moment for AP-5, but also a structured story of his and Chopper’s initial relationship. “Double Agent Droid,” unfortunately, carried barely the breath of this intriguing question and nothing that really advanced the characters of either droid or, really, any other characters involved.

The setup for “Double Agent Droid” was simple enough: AP-5, Chopper, and Wedge Antilles infiltrate an Imperial Security Bureau listening station and retrieve secret codes connected to the area around the grassy Outer Rim planet of Lothal. The plan goes accordingly, except Chopper, even sporting an Imperial paint job, is caught by scanners at the facility, which catches the attention of a listening station ship elsewhere. The head of this small ship is a Josh Gad voiced Imperial equipped with the same computer/brain interface worn by Lobot in The Empire Strikes Back. Like many Imperials, this one chooses to act for personal advancement over general Imperial good, and devises a way to remotely take control of Chopper after he plugs into an information port at the base. This leads to an acquiescent Chopper, and while the mission is a success in securing the codes, AP-5 immediately begins to suspect something is awry. Toss in Wedge and the others ignoring AP-5 until it’s too late, and the result is Chopper causing havoc on the Ghost before anyone else really catches on. In the end, AP-5 helps save the day and Hera sends a power signal back to the listening ship strong enough to blow it up, because, like many things in the episode, it just happens. 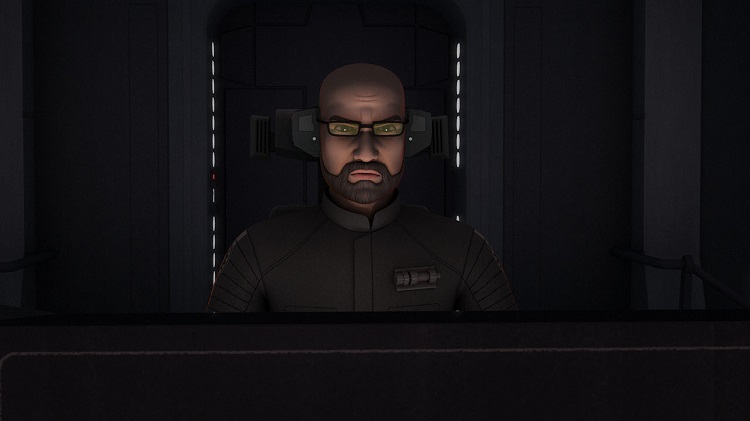 The story at its heart feels like an expanded-upon idea of “let AP-5 suffer,” similar to AP-5’s role in “Warhead.” Unlike in that episode, which allowed viewers a glimpse of AP-5’s own vulnerability contrasted against his usual pompous confidence, “Double Agent Droid” simply ran with just the confidence. In “Warhead,” when Zeb had AP-5 hack the Imperial infiltrator droid, there was real fear in AP-5’s reluctance to do what was asked of him. When asked to step outside of the ship to reach an exterior access panel in “Double Agent Droid,” though, AP-5 simply voiced a sarcastic irritation at having to go beyond his usual duties. That is what separates this episode from previous AP-5 features. AP-5 did not grow at all as a character, from the beginning claiming to be the best at everything, and in “Double Agent Droid” he’s the best in every situation thrown his way. Unfortunately, twenty-two minutes of AP-5 being right about everything leads to a not-so-exciting soundtrack for everything else.

In terms of the place of droids in the Star Wars galaxy, the entire contrivance of Chopper’s remote personality abduction was premised on the rebels ignoring AP-5’s warnings, something that AP-5 complained was an inherent problem of the Empire after he duped a fellow inventory droid at the Imperial base. The issue with AP-5, however, is that it’s hard to argue whether Wedge’s, Hera’s, or anyone else’s opinion of the droid was based on his being a droid, so much as his personality. So the episode skimmed the surface, while referencing the vulnerability of a sentient being who can be reprogrammed at will. Never mind Chopper’s inherent ability to transmit “power” at a level strong enough to blow up a ship while not sustaining any damage himself, the potential fear of losing Chopper, or at least his personality, was hardly mentioned, much less played up. Thus, another problem with “Double Agent Droid” was its failure to be serious enough about the situation. This leads, in turn, to another missed opportunity. 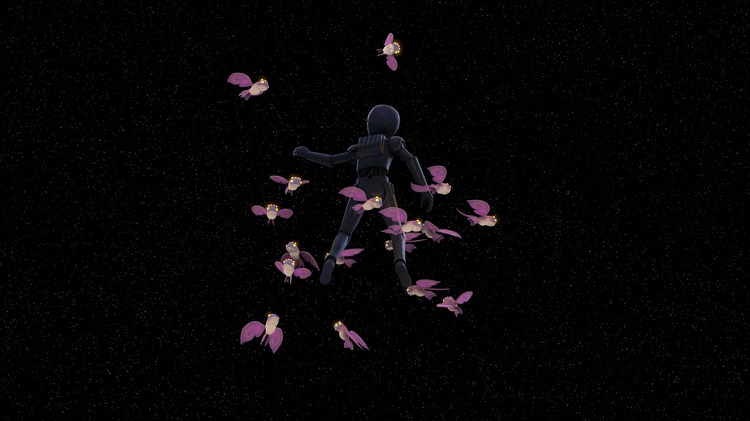 Perhaps one of the best moments of the episode was its final minute, which saw AP-5 floating alone in the vacuum of space – a place where K-2SO would happily remind you that he would be just fine – and surrounded by a flock of young neebrays. It’s an almost existential moment for AP-5, where the droid suddenly realizes that perhaps this would be a happier existence after all. He starts to sing, but is abruptly rescued against his will to return to his old life. It’s an incredibly over the top and fun thing to do with the character, and perhaps that tone should have been more pervasive through the episode. A much more light-hearted approach would have benefited the first act and saved the second act’s failure to really play up the serious ramifications of the infiltration of Chopper. In the end, it all felt very by the numbers; to borrow a term more often applied to live action shows and movies, the characters simply went through the motions.

“Double Agent Droid” is the last episode before the final three of the season and serves as a prime example that even when Rebels seems to be firing all its pistons smoothly, hiccups can still occur. The few interesting moments cannot overcome the end product and in the absence of character development, it may be the episode best exists to serve the purpose of pushing the MacGuffin of “Double Agent Droid,” the Lothal codes, into the hands of the rebels as a setup for the season finale, potentially as part of a trap devised by Grand Admiral Thrawn (who receives a notable name check in the episode, as if he was expecting the rebels to use droids to steal codes – hint, hint). Regrettably, “Double Agent Droid” never quite finds the right tone to adopt, be it serious or just plain silly, and suffers accordingly.

For more on “Double Agent Droid,” check out the episode guide on StarWars.com. 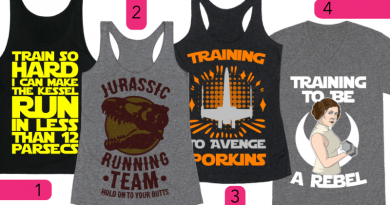 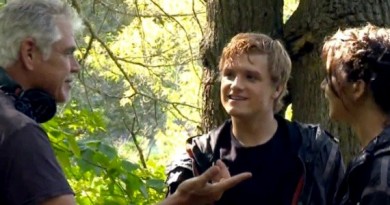 Change and Stability in The Hunger Games Franchise 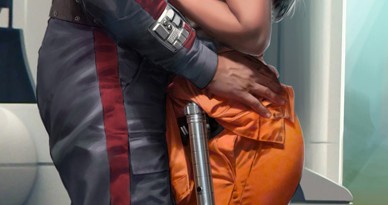