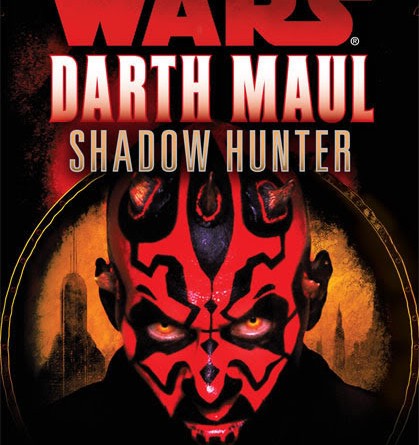 Thinking back to your first experience seeing The Phantom Menace in 1999, what two words come to mind about how you viewed Darth Maul then?

I posed that question to a number of Star Wars fans, and here’s what I got in response:

For me, some distinct memories come to mind. The searing yellow eyes, the red and black tattoos, then the thought erupting in my fannish brain, “Wow, I didn’t know Sith could fight like that!” About halfway through the Battle of Naboo, I found myself entranced by the masterful fight sequence and somewhat terrified of what this new, deadlier Sith could do. My two words – fury unleashed. 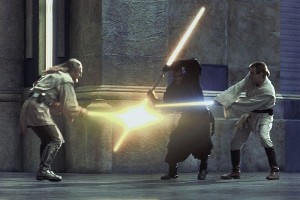 There are moments in a movie that are iconic and unforgettable; they become seared in your memory. If you were a Star Wars fan – either by way of the Original Trilogy or by diving in as a new one with Episode I – one of those moments is probably Darth Maul, bisected, falling down into the seemingly endless depths of a melting pit on Naboo. Obi-Wan’s victory gave reason to cheer, at least a little bit, right before we mourned for Qui-Gon.  Three cheers, the wicked Sith Lord was dead.

Or so we believed.

Star Wars became popular for a number of reasons. One was the movies’ fast pace, working from the assumption that movie-goers would fill in the blanks on the background of the war and its key players. To make this leap as a storyteller, George Lucas had to believe his audience would have some imagination and the ability to accept the incredible. The fan community built around Star Wars evolved from message board discussions, Facebook chats, podcast musings, and even in-person debates waiting in line for the next panel at a convention like Celebration or Comic-Con. If you’ve joined in any of these discussions, it is quite evident that every fan’s imagination works in a unique way.

Still, I can’t say I’ve come across too many fans suggesting – with any degree of seriousness, anyway – that Darth Maul cut in half onscreen was anything other than a signal of his demise. Of course, this is the franchise where one exploded Death Star yields another, so perhaps we should have seen the signs.  Then, in Revenge of the Sith, Chancellor Palpatine relates to Anakin the legend of Darth Plagueis, who had the power to save people from dying. Maybe that should have been another clue.

So if you’re a fan who’s a bit skeptical of the idea of resurrecting Episode I’s Big Bad, you’re in good company. Even Dave Filoni, The Clone Wars supervising director tasked with bringing back Darth Maul, had his concerns when reflecting on the character’s defeat in The Phantom Menace:

“I thought George was definitively saying to the fans, ‘There’s no way this character is coming back. This is not a Boba Fett/Sarlacc Pit situation where, because of fan love, Boba gets out of that thing any number of ways.’ Fast-forward ten-years, and I’m the one to bring Maul back.”

Filoni’s honest assessment given in an interview with EW.com suggests that he appreciated how much of a tough sell resurrecting Darth Maul was going to be.

Not all fans had written Darth Maul off, though, even if only as a fun thought experiment. In a wonderful twist of fate, one of them was Sam Witwer (Being Human, The Force Unleashed), and the topic came up in the recent StarWars.com interview that revealed his role as the voice of Darth Maul in this Friday’s episode of The Clone Wars.

“The funny thing is, me and my friends have already discussed this. We had already talked about it. If Darth Maul would have come back, what type of miserable existence might this guy have been living in the years following The Phantom Menace?”

An interesting dynamic is created when a story gives fans the benefit of the doubt of having their own imagination to fill in the unexplained backstories and empty spaces in the storyteller’s narrative. Sometimes that leads to fans having strong self-determined notions on what has or hasn’t happened off-screen. I remember clearly my initial reaction upon hearing that Anakin would take an apprentice in The Clone Wars – brow furrowed, I shook my head and said, “They can’t do that.”  Well, they did, and despite my initial reservations, as someone who likes to creates stories I tried to keep an open mind. I haven’t been disappointed, and honestly Revenge of the Sith has even more resonance now than it did before The Clone Wars. 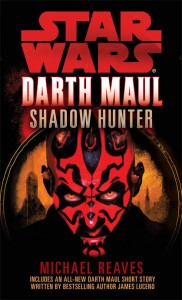 Ahsoka’s appearance in the Galaxy Far, Far Away seems to have given the Lucasfilm team a better understanding of how to engage fans in a story they once thought inconceivable.  The coordinated effort between the books and the television show has been weaving little threads into the Prequel era timeline that keep nudging fans toward the possibility that Maul’s survival isn’t as impossible as we might have thought. The novel Darth Plagueis by James Luceno tells how the Sith Master toyed with the ability to control life and death. Luceno also wrote two new short stories with Maul as the point-of-view narrator – “Restraint” and “Endgame,” which were included in the newly reprinted editions of Episode I tie-ins Darth Maul: Shadow Hunter and The Phantom Menace novelization, respectively – that show the Sith apprentice may have been more cunning, and may have learned more dark side wisdom, than his master Sidious realized. The television show started introducing magic, voodoo, witchcraft and even the living dead, and the Sith witch Mother Talzin, who used her sorcery to turn Maul’s brother Savage Opress into a Force monster, was given her own section in Dan Wallace’s recent Book of the Sith by 47North. Finally, if fans are wondering like Sam Witwer did about Maul’s missing years, Ryder Windham crafted a chilling story for Scholastic called The Wrath of Darth Maul.  With the final reveal on The Clone Wars imminent, the puzzle pieces seem to be ready and arranged.

I thought it would be fun to ask some of the writers who had a hand in putting all these elements into play about what they’ve discovered about the tattooed Sith. So I followed up my first question with two more:

Now that you’ve been able to delve into the character and expand Darth Maul’s lore, what two words would you add?

Can you share something surprising you uncovered or created about the character while writing the new material for your book?

DW: It’s obvious that Maul was being used, and that Sidious probably didn’t shed a tear when he got chopped in half by Obi-Wan. But I also don’t think it was a bad life for Maul. This is really what he trained for, to fight and kill the Jedi. He died doing what he loved. Or didn’t die, as we’ve now discovered. Book of Sith didn’t focus on Maul in particular, but it did add a whole new layer to the Nightsisters and why they believe what they believe. For Maul fans, it’s a deep dive into the mythology of his homeworld.

RW: I drew a lot of information about Maul’s youth and training from Jude Watson’s Episode I Journal for Darth Maul (Scholastic, 2000), and also incorporated details from other stories, but I can’t think of anything I literally uncovered. I think my biggest “creation” for the book was to develop Maul as a sympathetic character, not introduce him as a monster from infancy. After I learned details about his connection to Savage Opress, I thought, “What if Maul, at various times in his life, almost desperately wanted a friend, but it never worked out?” I didn’t just want readers to feel sorry for Maul, but also to care about him on some deeper level. I think readers were surprised by the concept that Maul could be more than a super-villain, that he was also, for all his powers, a lifelong victim of circumstances.

Unlike Dan and Ryder, I’m still working on my two words to summarize the new depth to Darth Maul’s character. There has been so much to uncover about his past and the lore surrounding his fate. I’m excited to watch some more – and important – pieces of the puzzle be revealed this Friday when Darth Maul returns. I’ll be sure to let you know, but if anyone has their two words picked out drop a comment here or tweet them to @SUVUDU.

Thanks to authors Dan Wallace and Ryder Windham, FANgirl contributors Linda Hansen-Raj and Megan Crouse, and Tweeter Joel Cramer for taking their time to answer my questions. 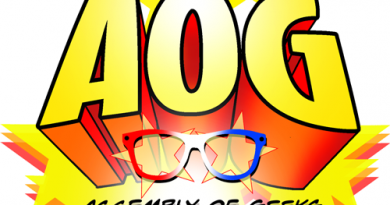 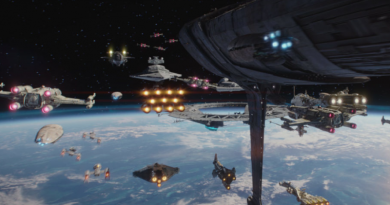