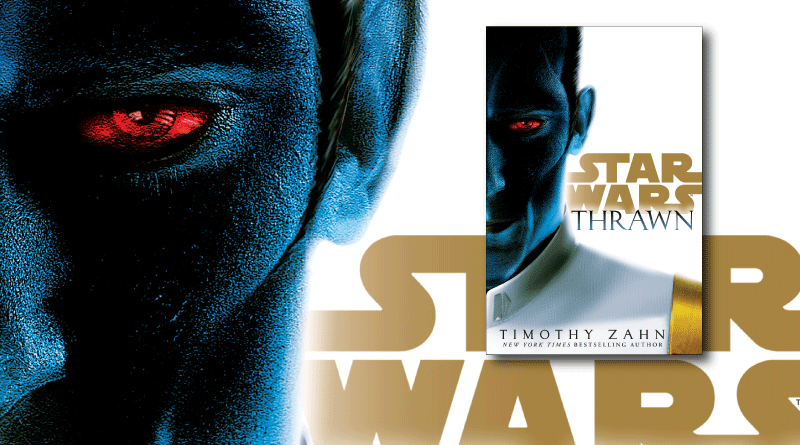 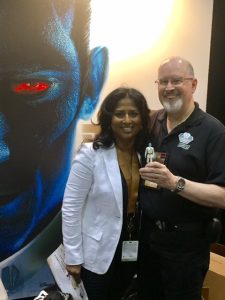 This interview really doesn’t need an introduction: at Celebration Orlando I had a chance to chat with Timothy Zahn — Hugo winner, New York Times best-selling author — about one of Star Wars most iconic villains. With the original Thrawn trilogy on NPR’s list of Top 100 Science-Fiction Fantasy Books, Grand Admiral Mitth’raw’nuruodo returned to canon in Rebels and in Zahn’s recently released novel, Thrawn.

What really differentiates Thrawn from the Thrawn novels of Legends is that for the first time, we are given Thrawn’s perspective in the form of journal entries at the beginning of each chapter and by his perception of those he meets. But Thrawn’s insights are varied and interesting — and not only in a Galaxy Far Far Away.

As a physician, I loved that Thrawn endorses exercise:

“The mind and body are linked together in a meshwork of oxygen, nutrients hormones and neuron health. Physical exercise drives that meshwork, stimulating the brain and freeing one’s intellect.”

When I expressed to Tim my anxiety about Thrawn’s future in Rebels, Tim said to me, “Courage.” And here is Thrawn’s own advice, no matter what happens to him:

“A friend need not be kept either within sight or within reach. A friend must be allowed the freedom to find and follow his own path. If one is fortunate, those paths will for a time join. But if the paths separate, it is comforting to know that a friend still graces the universe with his skills, and his viewpoint, and his presence.

For if one is remembered by a friend, one is never truly gone.”

Did I out-Thrawn Zahn in question 1? Read for yourself and decide.

To be honest, I never made the connection between that journal entry and Thrawn’s name. (Clearly, my subconscious is smarter than I am.) It was really just something gleaned from six decades of watching people’s lives – including my own – and how plans and expectations often end up going in unexpected directions.

I actually resisted the idea of doing any of the book from Thrawn’s point of view. As an alien, his thought process should be different than humans; but if the differences are too great we risk losing the readers or at least snapping them out of the story. It took several tries before we got to the pattern that ended up in the book.

And no, my perception of Thrawn hasn’t really changed over the years, except in that my overall understanding of people and the world in general has deepened over that time.

It’s been a real treat. Thrawn is so unlike any other Imperial officers we’ve met in the GFFA that he immediately stands out. Those who saw him for the first time in Rebels will hopefully be intrigued enough to read the book and get a deeper insight into him and his character, as well as seeing more of him in action.

Tweaking “Mist Encounter” to put Eli into the thick of the action was fun – I’ve always liked that story and Thrawn’s tactics as he runs the Imperials in circles. Since I was writing him in a hitherto untouched part of the timeline (untouched by me, anyway – some of the old games had visited him in that time period), there really wasn’t anything I had to let go of or overwrite.

I don’t see my characters in terms of voice or appearance, but rather as personality or attitude. That said, I very much enjoyed the way the Rebels team brought him to life, in his appearance, voice, and actions.

I also appreciated the freedom I had to tweak certain incidents, such as the one you mentioned, and give additional or alternate explanations for the viewers who may have thought those were somewhat out of character for him.

I think he’s beloved for a couple of reasons. First, because the readers can understand why he’s chosen the Imperial side of the great galactic struggle, and can therefore sympathize with him on a certain level. Second, the heroism of the heroes is measured by the villainy of the villain, and a smart, competent villain forces the heroes to bring their A-game to the field. That makes for a more interesting, exciting, and dramatic story.

Indeed. The final fatal flaw of all evil is that it is fundamentally selfish, and as such can never trust anyone else enough to form any true alliance, or at least can’t maintain any such cooperation beyond the point where one party sees benefits in betraying the others. Friendship, trust, and loyalty are what binds the Rebellion together, and ultimately brings them victory.

I’ll also note in passing that Thrawn’s ability to inspire loyalty among his troops is one of the things that makes him unlike most Imperial officers, and hence more dangerous to Our Heroes.

If you haven’t checked out Thrawn, check out our review.

Family Trumps Distance: How Excluding the Fels from Apocalypse Goes Against Star Wars’s Use of Family 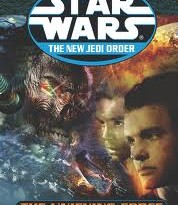