The latest three The Clone Wars episodes have been based loosely on a comic series called Slaves of the Republic. I’m not familiar with the comic at all, so I did a little research when I knew I’d be writing a blog entry for the TCW adaptation. The basic plot is the same: Anakin and Ahsoka go undercover as a trader and a slave respectively, and save the captured Togruta. The character designs for the Togruta leader and the Zygerrian characters are similar in both, with the show exactly replicating some of the comic panels. Both the book and the show intend to serve mostly as adventure stories and will be judged, independently, as such. 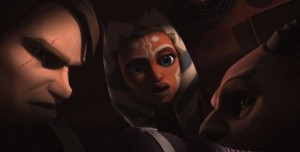 This has been an eagerly anticipated arc, with fans across the internet clamoring to see the characters pushed to their limits. Ahsoka’s slave costume in the show is more elegant and slightly less revealing than its degrading comics counterpart, but it still made me a little uncomfortable to see a character who’s supposed to be fourteen or so shown off like that. On the other hand, we have some serious Anakin angst, and Obi-Wan getting chained to a plinth and whipped, which sounds like something right out of fanfiction.

The three episodes – “Kidnapped”, “Slaves of the Republic”, and “Escape from Kadavo” – are chronologically contingent but move from location to location. The first is devoted to finding out that a large population of peaceful Togruta have been captured and where they’ve been taken, which means that the next episode has to pack a lot of story into half an hour. The third episode is another set-piece action story that adds some new characters and brings others to the end of their emotional arcs.

The animation on the whole is gorgeous in these episodes: the stylistic choices are still a little jarring for me when applied to humans, but clones, landscapes, and the many different ages, genders, and colors of Togruta look great on a big screen. We also get to see a wide selection of aliens, including Hutts and Talz.

“Kidnapped” focuses primarily as introduction to the main story, and therefore feels a bit long. An extended action sequence shows off the choreography that TCW admittedly does very well: Anakin’s and Ahsoka’s jumps and flips are cool. They’re set against Obi-Wan being intentionally not cool, stalling for time by getting beaten up by a very detestable Zygerrian. The wolf-like bad guy’s motive is pretty much “our planet’s economy is fueled by slavery so let’s keep slavery.” The real enemy, if we’re talking moral lessons, is dispassion toward people and love of money. “Kidnapped” could stand on its own as a pretty unremarkable villain-of-the-week episode.

“Slaves of the Republic” shows more attempts at illuminating character through situation. The dialogue ranges from silly – “Tell that to my whip!” – to entertaining – Ahsoka: “Remind me why I’m playing the part of the slave?” Anakin: “I tried it once. I wasn’t any good at it.” The koan for the second episode is, “those who enslave others inevitably become slaves themselves,” which is referenced again in “Escape from Kadavo.” It would have been nice if that had been the koan for the first episode to provide a sense of completion, but since the queen does not appear in the first episode, it does make some sense this way. The antagonist’s name is Miraj Scintel –a.k.a. mirage scintillate, a.k.a. false beauty, anyone? She’s the queen of the slavers, so naturally keeps her own unwilling servants. Her appearance is creepy-looking, with her horn/ear/hair and black-rimmed eyes, but she’s definitely got a standard of beauty and her greatest weakness seems to be the pride that Anakin manipulates with his flattery. Although Anakin isn’t a slave in name, she’s clearly manipulating him and ready to sentence him to death.

Anakin’s attractiveness is as assumed as Ahsoka’s has been in this, and past, episodes. He gains the favor of the queen – who is an equal opportunity subjugator, also having female servants – apparently by the force of his blue eyes. The queen is definitely disturbing, mixing a Jabba the Hutt vibe with the pinched elegance Mina Bonteri had. Anakin hams it up, presumably knowing how slavers talk from experience, and charms her with flattery and tales of his own fighting prowess.

The episode does follow two distinct female characters, Ahsoka and Miraj. When the latter proposes that Anakin stay loyal to her, his reply is “[Our relationship is] nothing. You have all the power.” As a married person, he presumably knows that both partners need to be equal. She is an honest monster, and the episode ends with him considering joining her. She’s definitely a strong female character, but also a villain whose main motive doesn’t necessarily stem from femaleness, so I give her points for equality there. She becomes a pawn for Sidious, but then, so does everyone else.

Ahsoka in this episode is pretty much in-character as fearless, feisty, and slightly annoying. The problem I have with her slave outfit is compounded by the fact that the reveal for the queen is the reveal for the audience: we too are supposed to be waiting eagerly to see what Ahsoka’s wearing, and therefore are set up to be as much perpetrators of exploitation as the characters are. Ahsoka refuses to play her role quietly and gets chided for backtalk. There’s a strong message in this episode about the uses and perceptions of beauty, and how it can be used and misused.

Ultimately, the flattery that matters to the queen is not about beauty but power. She is flattered by Dooku in that he backs her up with the power of the Separatists. On the other hand, she holds a double standard and sees the Jedi as weak for the way they have “forsaken their ideals and become a slave to the Republic.”

“Slaves of the Republic” is either food for thought or such a confusing mish-mash of ideas and themes that I can’t pick a clear one out. It’s a dark episode: we get Anakin Force-choking a queen strong enough to tell him to stop “misbehaving,” and we get all of the characters forced into situations they don’t want to be in but can’t escape. Anakin isn’t literally chained, but he can’t leave the oddly friendly company of the queen without Ahsoka and Obi-Wan suffering for it. Miraj handing Anakin the means to kill her only emphasizes how much he can’t. Obi-Wan is in a similar position: too important to be killed, but the Togruta suffer instead if he acts up. Miraj says that commitment is a form of slavery, and for part of the episode, it seems to be. (My confusion over Miraj’s motive and perspective might be based on her voice acting or direction: no matter what she’s saying it’s in the same smooth tone that TCW females tend to adopt, so that it’s hard to tell what she derides and what she respects. Although, as someone both enslaving and attracted to Anakin, maybe she doesn’t see a need to differentiate between the two.) Here’s another case of where I’m not sure whether there’s a lot going on under the surface or if the show just isn’t written very well enough for there to be something obviously sensible on the surface.

There’s a lot here that could lead to Anakin’s fall to the dark side, the most obvious being the Force-choke. The episode ends with all of Our Heroes captured. In Empire Strikes Back fashion, their fate is uncertain.

“Escape from Kadavo” begins very dark, with Obi-Wan in slavery in a setting that reminded me of the spice mines of Kessel. It’s a chilling idea, a sort of alternate look at classic characters that is what I’ve always wanted out of TCW. It was interesting to see how Obi-Wan deals with having to call someone else Master, and to see what Anakin did and might have gone through as a child if he hadn’t been rescued. (Rex gets similar treatment.) The dialogue is filled with cackling, Flash Gordon-type excessiveness. Miraj uses the word “compliant’ to describe what Obi-Wan will become shortly before a nice conversation with Dooku in which she refuses to apply it to herself. She’s become attached to Anakin, either because he’s a symbol of her power or because his eyes are just that blue.

Ahsoka gets rescued by Anakin, and later shows off her own skills with a hero catch when the Togruta are falling to their deaths. She’s been more annoying.

Miraj’s eventual defeat reminds me of Darth Vader’s at the end of Return of the Jedi; both that a third person is involved, and that her redemption comes very late. It’s interesting to think that Anakin would probably never notice the parallel. In this way, the queen very much reminded me of a classic villain.

“Escape from Kadavo” was entertaining. This was a fun episode, with lots of Jedi jumping, alien atmosphere in the Zygerrian city, and clones and Plo Koon showing off. It’s nice to explore new corners of the Star Wars universe once a week. Of the Slaves of the Republic arc, the middle episode both had the most going on and was the most muddled. (While I’m being positive, I love that the episodes are up on starwars.com shortly after they air.) The Zygerria arc has something for everyone, whether you’re in it for action or drama, Anakin, Ahsoka, Obi-Wan, or Rex. It also has everything that should be expected from TCW: clichéd or overdramatic dialogue, plot holes, and logically shaky politics. “Escape from Kadavo” was my favorite out of the three episodes. Overall, I give them a 5/10 and think that the anticipation was the most amusing part.